Friday Favourites: things we read, watched and played in October

This month we’ve been jetting through outer space and traversing the Canadian Wildnerss. Check out the best things we read, watched and played this month! 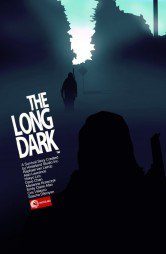 Well, this week’s piece was going to be about The Walking Dead, Season 6, but after the super traumatic third episode on Monday I’m not going to breathe until the MATTER is resolved (you know what I mean).

So, instead to The Long Dark, a post-apocalyptic survival game set in the Canadian Wilderness. I’m sure the Canadian Wilderness is cold enough even in high summer but in this scenario Fimbulwinter has seized the world and you wander an Icy-not-so-Wonderland populated not with zombies but frozen corpses, ravening wolf packs and angry bears (there is a disclaimer from the producers assuring us that wild animals would not, in fact, behave quite so meanly to humans as they do in the game). The only goal is to survive, and to survive as long as possible as you scrounge up shelter, firewood and the occasional canned good. The wolves had me for breakfast several times on the medium difficulty setting, so now I’m trundling around on the easy ‘Pilgrim’ level where the wildlife is more benign. Ice fishing, shooting, campfires, the occasional book (not for reading but for kindling) … it would all seem quite pleasant if it weren’t for the risk of hypothermia and the fact one’s days are limited to the number of lights left in your match book. Highly recommended for Doomsday Preppers. 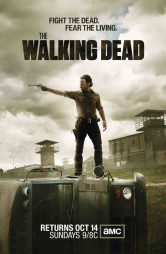 I’m late to the party with this one, but I finally started watching The Walking Dead. I read the comics before it was adapted to TV, but gave up during the prison arc (because it was too rapey). So I didn’t pay much attention to the show, figuring I’d already given the property enough of a shot – even though Oliver and Sharan are huge fans. And I certainly trust their opinions!

That all changed when I was in New York a few weeks ago. I scored tickets to the  Season Six premiere at Madison Square Gardens and it was a blast. So I downloaded the first season from iTunes and mainlined it during my sleepless flight back to London, and now I’m nearly caught up. The show is loads of fun, very gross, and totally worthwhile. As a bonus, I can finally argue with Sharan and Oliver about it – to the despair of all our unconverted colleagues. 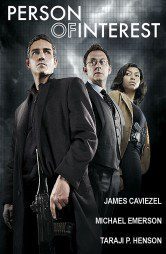 If you judge solely by the image Netflix uses to promote Person of Interest, you’ll probably just ignore it, due to how utterly bland it is – people with guns on a grey background doesn’t really inspire me to bingewatch a show. But upon hearing about the stellar cast (we have alumni from Angel, Lost, and new favourite Taraji P Henson from Empire), I gave it a go, and was surprised to find that it wasn’t a standard cop drama. It’s actually a little like Minority Report; there’s a machine that can tell when someone is in danger. They’ll either commit a violent crime, or be the victim of one. And there’s lots of twists and turns along the way. Once you dig deeper into protagonist John’s character (who initially seems a stereotypical ex-Army white guy bent on revenge) you find a beating heart within. And it’s great to see a black female character kicking ass in the police force.

Person of Interest is a good blend of futuristic crime and a nice hook. I’m only starting to unravel all of the secrets of the Machine (still on season 1) but am excited to find out more. Never thought I’d say that – I usually hate crime dramas. 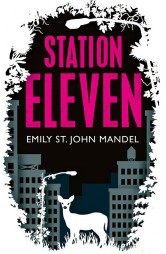 I have been meaning to read this book for a very long time, and I finally managed to read it this month. I can’t tell you how rare it is to actually get to something on my to-read list, it’s quite worrying. But anyway, Station Eleven is a really good read but I kept hoping for something bigger to happen, maybe I’ve been spoiled by The Walking Dead and all the other post-apocalyptic movies, shows and novels out there but I really wanted the epically dramatic event that we usually know is coming. Alas, I was disappointed, but that isn’t to say the book itself was disappointing. It was moving and completely human, in a genre usually held up by the dramatics (that I do actually love) it really was refreshingly different to read something that was so focused on people rather than their trials. 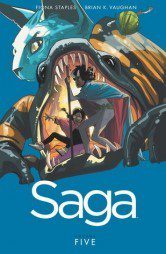 Every time I read the new volume of Saga I think ‘This is my favourite volume so far! This is the best! Nothing can be better!’. Then I finish it, feels a deep Saga-less chasm open up in my soul, and pre-order the next volume. The same was true of Saga Volume 5.

Ghus the adorable walrus shepherd appears again, Marko goes all emo and grows a beard, and within the first few pages a giant lizard had pissed all of our heroes. This series is happiness, hilarity and heartbresk in book form – it shouldn’t be read, it should be prescribed.