Friday Favourites: things we read and watched in April

Comics with preposterously fun premises were the order of the day at Hodderscape this April. Maybe there’s something about the current political climate that makes one want to run off and bury oneself in a comic entitled ‘Snotgirl’. 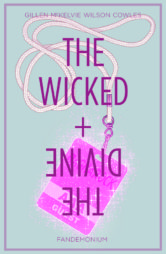 For some reason I read volume one of this a couple of years back, then promptly managed to abandon the series until a couple of weeks ago when I downed three volumes in one go. I highly recommend this tactic.

For those who are unacquainted with this series, the premise is this: every ninety years, twelve gods incarnate as humans. But they are not mere mortals: they are pop stars. This premise is so much fun, and seeing it develop over the series is a joy. My favourite bit was the pantheon fan convention which – as someone who has attended London Comic Con for the last three years – was both accurate and wonderfully detailed. My other highlight was Baphomet, for, um, artistic reasons. 😉 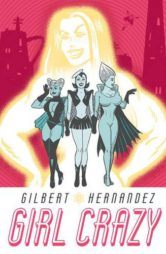 While I’ve never read a Hernandez Bro work that held a candle to Love and Rockets, but Girl Crazy is very daft and very fun. Three young girls with extreme curves and bulging biceps head to Tijuana to bust their friend out of jail, encountering superhero aliases and supernatural body-swapping along the way. The plot is senseless in an endearing way, and we all know we’re reading this book for the visuals. Regrettably, the very beautiful new Fantagraphics hardback edition comes with a gross introduction by “veteran artist” Jim Silke who understands the book as a physical manifestation of the male gaze. There is always this discomfort when reading Hernandez comics, but I like to read the brothers’ work in light of Jaime’s excellent realisation of queer heroes Maggie and Hopey in Love and Rockets. 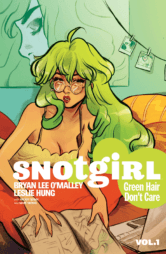 Snotgirl sounds disgusting, and it kind of is, but it’s more about how we represent ourselves on and off the internet. Lottie Person is a fashion blogging millennial with a ton of allergies. I only identify with the latter part of that sentence, but that’s not the point. Lottie starts off as a budding star of the online scene and it all goes pear-shaped in a rather surprising way. Of particular note are very trippy scenes where you can’t quite work out what’s real and what’s pure fancy, and the marketing buzzwords peppered throughout which made me re-evaluate my style of talking. Now I’m off to talk about how something is completely off-brand. 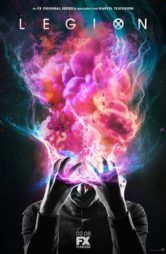 The best thing I’ve watched this month are the first four episodes of Legion. It is fun, intelligent and completely bizarre – I’ve never watched a superhero show quite like it, and I’m in love with it. Dan Stevens is fantastic, bringing the strange and the realistic in equal measure, but my real favourite is Aubrey Plaza – she is just so much fun to watch. The only real big fight scene I’ve seen so far was at the end of the first episode and it was AWESOME, but the show doesn’t seem to be resting on its action to get you gripped – it is all about the characters and the mystery of Legion. Noah Hawley really has pulled this out of the hat, I absolutely love it. FYI, if you’re further than I am in the series please don’t spoiler me… we really won’t be friends.