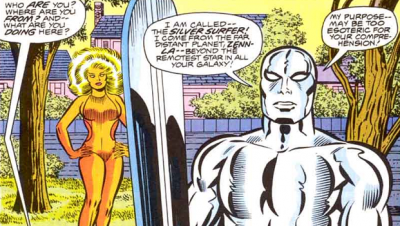 Posted on October 25, 2013 in Friday Favourites with tags Lavie Tidhar

You may have heard (we’ve been talking about it enough!) that The Violent Century came out yesterday! Inspired by the book and by some of your excellent submissions to our What Makes A Hero competition, the Hodderscape Team have picked out their favourite superheroes for this week’s Friday Favourites! 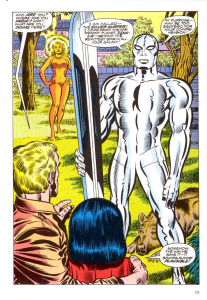 My best friend and roommate at college was comic book collector and intellectual, Richard Reynolds. While the rest of us were churning out Shakespeare and Dickens for our dissertations he was cool enough to persuade the English Faculty to let him do Superheroes (Superheroes: A Modern Mythology by Richard Reynolds, University of Mississippi Press, 1994). So there was not much mileage in trying to outwit him in a comic book stand off: the man knew every writer, artist, character, and plotline in the entire Marvel/DC canon. It was beyond unlikely I was going to find anything he hadn’t heard about on our weekly trips to the Comic Bookstore on the Cowley Road.

So it was with a sense of almost unlimited excitement that I discovered something I thought even he hadn’t discovered: The Silver Surfer Graphic Novelof 1978. Wrong again, Richard informed me; The Silver Surfer had been around since 1966 when he debuted in Stan Lee and Jack Kirby’s Fantastic Four. No matter, he became my favourite: the Surfer spoke to me like no other superhero. You see, he’s the tragic archetype. First, to save his own people, he agrees to be the herald of a planet-eating monster, Galactus. He does some really bad stuff as a consequence, leading Galactus to some very toothsome M&M-like planets, then defies his master by ganging up with the FF to save Earth. Oops! He spends the rest of the first series marooned here saving our worthless souls instead of scooting round the galaxy on his natty speedier-than-light board. In later comics he escapes Earth only to his girlfriend is now Empress of their home planet Zenn-La and their romance is off– darn!  Yep, there is something doomed and Miltonic about this ultimate superhero: no weapon, no hostile environment, not even a Black Hole can harm him; his vulnerability is all INSIDE, in his very soul. There is something nobly suffering about the Surfer that seduced my Eng Lit heart. 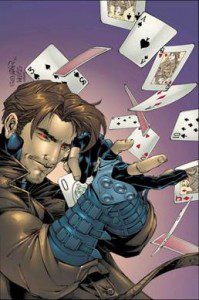 ‘Which superhero is your favourite’ is not an easy question for me – the answer is entirely contextual! For example, I love Catwoman – the campy, cool Julie Newmar/Eartha Kitt Catwoman from the 1960s Batman tv show, Michelle Pfeiffer’s extraordinary, damaged Catwoman, and the slinky Catwoman of Batman: The Animated Series. But I’ve never warmed to any of her various comic book iterations. (And she doesn’t even really count as a superhero.) I’ve always liked the idea of Rogue, though I’ve never loved her execution – in any medium – enough to call her my favourite. My husband and I have a long-running joke about Magneto and his struggles to fit in with the X-Men, during his occasional lapses into heroism, but that’s a Magneto of my own invention. So I suppose I’ll have to fall back on my old standby, Gambit. I like him in the comics, I like him in the animated series, and I have no problem at all with Taylor Kitsch’s turn as Gambit in the Wolverine movie from a few years back. 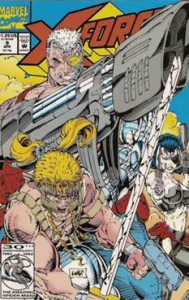 Keep in mind that I got into comics in the early 90s, the Image/Jim Lee/Rob Liefield/Todd McFarlane/gigantic guns/cargo pants with teeny pockets era. X-Men had just split into two titles, X-Men budding off from the long-running Uncanny X-Men, and I, ever the completest and making my first foray into the world of comics collecting, thought it would be easiest to start with #1 of something. So that’s what I chose. Gambit, with his shady past, cool/ridiculous power, absurd accent and flirty mien became my instant favourite. What can I say? It was the 90s; trench coats were cool. Plus, the alternatives were a bemulleted Superman, a very grumpy Batman, and an endless parade of Marvel characters with enormous guns and teeny-pocketed cargo pants.

I think I’ll have to go for Hit Girl, the purple-haired, pint-sized super-heroine from Kick-Ass. The language that comes out of this kid’s mouth and the INSANE levels of violence she engages in are totally inappropriate, but also hilarious and utterly brilliant. So wrong and yet so right. 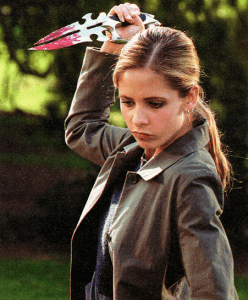 Buffy is my hero, and she’s also a super hero. she’s super strong, she has the occasional precognitive dream, she’s [spoiler alert?] part-demon and she has an endless supply of awesome quips. She doesn’t have a cape, rather a selection of great leather jackets. She’s saved the world . . . a lot.

Buffy is the star of The Greatest Show Of All Time, a show that continuously subverts expectations, lovingly mocking some of horror’s most cherished tropes. It also plays with traditional superhero narratives: the origin story, the ache for normal life, the sacrifice and the sense of responsibility that ultimately separates the superhero from everyone else around her. 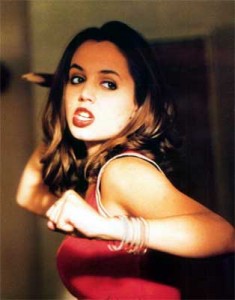 A childhood favourite of mine was Gambit from X-Men. I always wanted to have his accent and run around with a deck of cards and a staff – to be a mutant, eh? Alas my childhood is gone, so I think I should probably pick a superhero based on more substantial reasons than ‘I like his accent and his hands makes cards go all glowy’.

I think if I had to pick a superhero, I’d have to go for Faith from Buffy the Vampire Slayer – I like someone with a bit o’ crazy in them. Honestly I think that’s why she is my favourite, she walked both sides of the track. I’m not saying that going around murdering people was the right way to go, but it certainly gave her a lot more depth than Buffy. Don’t get me wrong Buffy is awesome, but she is a standard hero, there aren’t any difficulties or hardships that made her so righteous – she just is the way she is. Faith is flawed, she can be cruel and she didn’t have the comfortable upbringing Buffy did – she is essentially human. Plus her catch phrases all make no sense, which I think is awesome – so points for that. I honestly don’t know if my answer would be different tomorrow, but for now I’ll go with Faith Lehane.