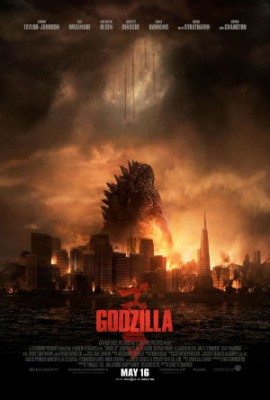 Summer blockbuster season – from Star Wars to Jurassic Park to… that other Star Wars, summer is the time that the big studios bust out their mult-hundreds-of-millions of pounds spent on explosions and post-production effects. It’s like Christmas in June.

Summer is almost upon us, the time of year when we swarm into a dark room full of people and watch amazing movies. Yes, Godzilla has stormed the cinemas and blockbusters season is upon is. Here’s what the Hodderscape team is looking forward to this summer.

The film I am most looking forward to this summer, in fact this week (!!!), is Godzilla.  I think I’ve already watched the trailer about 15 times. I absolutely love a disaster movie!  To me there is nothing better than a film where a city is being destroyed, as weird as that may sound.  And what better way to watch this happen than by a ginormous dinosaur-esque monster!  I really loved the 1998  version and can only imagine this year’s version will be even better – I am so looking forward to seeing the special effects and with a budget of $160 million, I imagine it’s going to be pretty spectacular!

X-Men: Days of Future Past (May)

The reason I’m excited for this film?

Have you SEEN the cast? I would watch this film if it was just the actors sitting there having a chat. In case you don’t know it has some (and by some I mean LOADS of) great stars: James McAvoy (my personal favourite), Hugh Jackman, Michael Fassbender, Jennifer Lawrence, Ian McKellen, Patrick Stewart, Halle Berry, Ellen Page, Nicholas Hoult, Anna Paquin and Peter Dinklage.

In case your mind isn’t already blown by the supreme awesomeness of that cast, here are some pictures that should help your excitement:

Yes, those are the faces of James McAvoy and Michael Fassbender crossed over (get it?) with those of Patrick Stewart and Ian McKellen.

Since I haven’t seen the film I am not going to give you a little run down of the plot, I imagine it is some sort of inter-species war the requires the current X-Men to travel back in time to get the help of the older generation. I imagine you’ll get more detail from the trailers! The only thing I needed to know was that the franchise FINALLY was having a real sentinel storyline. ON IT.

How to Train your Dragon 2 (June)

Honestly, I didn’t expect much when I went to see How to Train your Dragon in the cinemas – I was curious, because a lot of folk were recommending it, but I was leery. It is, after all, a Dreamworks project, and Dreamworks animation – you know, the house that Shrek built – is not always to my taste. I’m not sure, but I suspect that the combination of scatological humour, overreliance on cheesy soft-rock standards, and constant winking self-reference is a bridge too far for me. But I was assured that Dragon didn’t suffer from Shrek syndrome, and I like dragons, so I went to see it.

And it was great. Yes, the animation of the humans was still a little wonky  (those spindly limbs just don’t move naturally) but the bulk of the CG was gorgeous, and the character design and animation for Toothless was flawless. It came as no surprise to learn that Chris Sanders and Dean DeBois, the powerhouse behind the criminally underrated Lilo & Stitch, were the creative team behind Dragon, too. (The similarities in the designs for Toothless and Stitch are clear.) The film has real heart and a sweet, well-earned ending, and I’ve been looking forward to How to Train your Dragon 2 since it was first announced. Perhaps most excitingly, the characters are going to be aged up, a bold move on the filmmakers’ part and one which opens up the possibility of some really interesting storytelling for this and future instalments.

Mostly, though, I’m excited to get to see some of that gorgeous animation on the big screen again – and to spend a little more time with the greatest dragon out there. (Sorry, Smaug.)

Guardians of the Galaxy (August)

Having watched the trailer recently and being incredibly pleasantly surprised, I’m going for Guardians of the Galaxy – basically because it looks funny. Like, intentionally funny rather than so-bad-it’s-funny, which seems like it could be a possibly with Teenage Mutant Ninja Turtles (I know – I feel like a traitor to my generation saying that but I am really not optimistic about that one!). I am realising I have a soft spot for slightly rubbish super-heroes, and it looks from the trailer that Chris Pratt is going to be just that. There’s also a raccoon on the team.

Despite being released all over place last year, Snowpiercer only just got a US release date and a date is yet to be confirmed for the UK: so it could still be a summer blockbuster!  Based on the French comic  Le Transperceneige, Snowpiercer is set aboard a train transporting the last fragments of humanity through a new ice age. If you’ve ever been on a delayed train (highly likely) you’ll know that the environment doesn’t engender fraternity and warm fuzzy feelings, and aboard this post-apocalyptic train class warfare and violence rages.

So, the premise is awesome and the the people involved: EQUALLY SO. Snowpiercer is helmed by The Host director Joon-ho Bong and has a cast that includes both Tilda Swinton and Kang-ho Song. I may just commandeer the next train out of King’s Cross if this doesn’t get UK cinematic release.