Posted on September 16, 2016 in Film, Friday Favourites, Television with tags

Remakes, we all love to complain about them. And, let’s be frank, some of them are at best unnecessary, and at worst an insult to the precious memory of the original and a blight on humanity. BUT, they can be great, and today we’re celebrating our favourites.

Tell us your favourite remake in the comments!

From about age 6 to age 9, my favourite film in the entire world was the Boris Karloff classic The Mummy (1932). (The 1933 King Kong was a close second; I even tried to talk my parents into naming our family dog – a Cairn terrier – King Kong.) Long after I moved away from thinking The Mummy the finest film ever produced, I still looked back on it – and rewatched it – with a lot of affection. I didn’t go into the 1999 remake with any real expectations: I knew Brendan Fraser from films like (the very silly) Airheads and (the glorious) Gods & Monsters* and hadn’t even heard of the rest of the cast. But what the hell, I thought – it might be fun. And you know what? The 1999 Mummy remake is really fun. It’s ridiculous, over the top, fantastically campy, loves its source material, loves its ridiculous effects, and is just… genuinely… fun. The gender politics are still great (‘take that, Bembridge Scholars!’ ‘I… am a librarian!’)  but its depiction of race hasn’t held up at all, so I can’t unequivocally recommend it these days.

Despite that, I’ll still turn it on once in a while when I need a good, funny background film… and it never lets me down.

*which, seriously, you should go watch right now.

This might be surprising because you know here at Hodderscape we are pretty indifferent to Buffy, but I’m picking it nonetheless. The movie is pretty entertaining – it was written by Joss Whedon but ultimately the production changed his vision of the heroine and how he wanted her story told.

Whedon took back control when he created the TV series only five years later – remaking the entire universe and giving it a depth that was missing in the movie. In it we get a true origin story – fantastic character growth (protagonist and secondary), exceptional storytelling and elements of the quirky comedy we saw in the movie. Not to mention that Buffy was a show that had kickass ladies front and centre alongside all of its stories focusing around the empowerment of women and girls. It was a masterclass in remaking a world, only proven by the show’s A-list cult status. 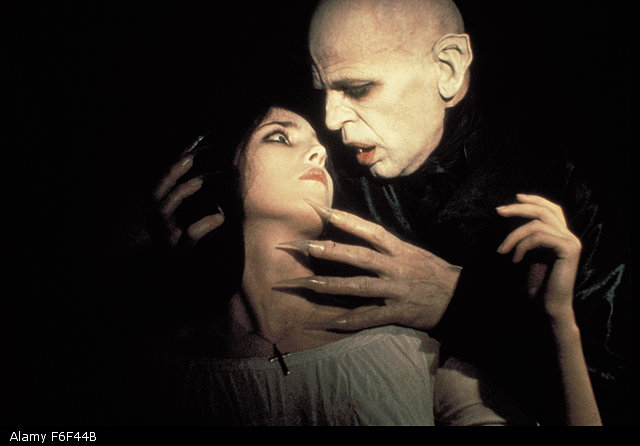 Werner Herzog’s remake of (or, more accurately, tribute to) Murnau’s Nosferatu is a classic in its own right. Herzog considered Murnau’s Nosferatu the best film ever to come out of Germany and recreates certain scenes beat-for-beat, but though he diverges little from the original plot, the mood is entirely different. While Murnau’s Nosferatu is pacey and filled with horrifying glimpses and mounting tension, Herzog is comparatively lethargic. He dwells in the dark foreboding landscapes that surround Dracula’s castle and lingering shots of the Count capture the melancholy of his miserable existence. Fun times! (No, really!)