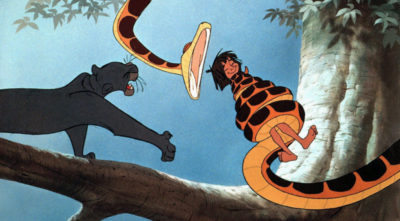 Posted on June 3, 2016 in Film, Friday Favourites, Television with tags

Are dragons reptiles? Are giant demonic serpents reptiles? What happened to that snake that Harry Potter spoke to at the zoo? This week’s Friday Favourites poses some interesting biological questions…

Smaug from The Hobbit

Are dragons reptiles? That’s a question for another day. Today we name them reptiles, and we talk about the greatest reptile of them all: Smaug, the great red dragon, eater of dwarves, teller of tales, haver of temper tantrums, arguer with hobbits. He’s big, rich, smart, angry, ambitious and articulate – what more do you want from a dragon? Oh, he also breathes fire, flies, is gigantic, burns shit down (a lot), hoards gold, taunts the little dudes who try to take his gold from him, and generally tears shit up, dragon-style. He is the first, the best, the greatest of all dragons, and I love him.

Richard ‘the Mayor’ Wilkins III from Buffy the Vampire Slayer

I don’t know if he lays eggs, I don’t know if he’s cold blooded, and he’s definitely more hell-bent on mass destruction than your average reptile, but the Mayor (in his demon form, Olvikan) has no legs and slithers around on his belly so I’m gonna call a snake a snake. There’s many reasons why the Mayor is the best reptile ever, chief among them that one of his first acts as demon serpent was to devour the odious Principle Snyder. Hell on Earth is nothing compared to being a judgemental, Slayer-expelling prick.

The snake from Harry Potter and the Philosopher’s Stone

Of all the fictional reptiles in Harry Potter this may seem the least consequential, but this scene from the first in the series has always stuck with me. In the middle of a rather tedious birthday trip to the zoo, when the Durselys are being their most unpleasant, Harry casually strikes up conversation with one of the snakes in captivity before inadvertently setting it free. It’s the first real evidence that he isn’t your standard misunderstood 11 year old, that there are more mysterious forces at work, and for that reason I’ve always enjoyed this little encounter.

Side note: do we ever find out where the snake disappears off to? Why haven’t I seen more fanfic chronicling it’s adventures??

Kaa from The Jungle Book

Kipling’s original Kaa,  a hundred-year-old rock python, is a friend and mentor to Mowgli. Unfazeable and polite, he is feared by the other jungle animals.  He uses his serpentine hypnosis  and vast memory to help the boy defeat his enemies. But in the 1967 Disney cartoon version he becomes an accomplice of Shere Khan. His attempts to eat Mowgli are comically thwarted at every turn. The comedy is heightened by a hapless lisp and mad, saucer-like eyes. He does, however,  have one of the best numbers in the show, ‘Trust in Me.’

The Lizard from Spider Man

Growing up in the 90s, I was pretty obsessed with watching cartoons, and could often be found glued to the screen, watching X-Men, Wacky Races, Pokemon or Ed, Edd and Eddy (to name a few). I used to love Spider-Man: The Animated Series in particular, but I always rooted for the villains – who wouldn’t when the hero is some whiny boring guy? The Lizard was always a pretty cool villain. A genius doctor who wants to regenerate his right arm, Curt Connors injects himself with lizard DNA and in the way that always happens in comic books, he becomes a lizard for some of the time. He still gets to wear his doctor’s coat though, so it’s not all bad.

It’s controversial, but I’m going to pick Blue from Jurassic World. ‘Blue?’ You would say, ‘but dinosaurs aren’t reptiles!’ You would be right, but by God I won’t let facts stop me from choosing a velociraptor. SO, as I was saying, Blue. A friend to Chris Pratt, a sister to other raptors and a true hero to all. Plus, that tag team with a T-rex, tho.