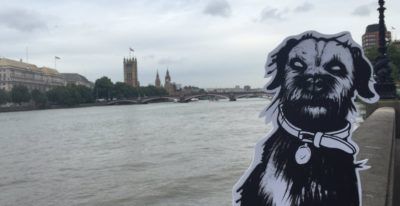 To celebrate the publication of Paul Crilley’s wonderful Poison City, which features the unforgettable trash-talking, sherry-drinking, attitude-having demon dog Dog, we’ve listed a few of our favourite fictional dogs. Some are from beloved books from our childhood (Old Yeller! Sniff.) some are from more recent favourites (*glares at Patrick Ness*) and all are equally lovable.

Steinbeck wrote this book after he learned he was dying and decided he wanted to see America ‘one last time.’ He uses Charley as a way of ordering and considering his own thoughts. It’s amazing and sad and lovely.

To this day I cannot use the phrase ‘to kill time.’ Tock, your legacy is strange and specific.

Sirius Black (Harry Potter and the All The Later Books)

We all have a giant crush on Sirius Black. We do.  That’s totally cool, right? Yes. Totally cool.

Jack, the brindle bulldog (The Little House on the Prairie)

Oh, Jack. I only read On the Shores of Silver Lake once because your gentle death of extreme old age was very upsetting.

I really want a Snowy. JUST LOOK AT THAT ATTITUDE.

Toto (The Wonderful Wizard of Oz)

Dorothy later returns to Oz with an assortment of other, weirder pets – including a kitten named Eureka and a hen – but Toto gets the edge.

The Hound of the Baskervilles (Guess)

FUN FACT the London pub called ‘the Sherlock Holmes’ was possibly the Northumberland Hotel which featured in ‘The Hound of the Baskervilles.’ I was always very disappointed that the hound wasn’t (SPOILER) a real demon-dog.

Old Dan and Little Ann (Where the Red Fern Grows)

Honourable mentions for Old Yeller and Sounder, aka two more fictional dogs that ruined my childhood (for obvious reasons).

Large, in charge, and beloved of Mr Rochester.

Snuff (A Night in the Lonesome October)

This weird, charming little book is so great. Why haven’t you read it yet? Anyway, Snuff narrates the tale. Also he’s Jack the Ripper’s companion.

One comment on “Friday Favourites: Favourite Dogs from Fiction”