Friday Favourites: the best things we read and watched this June

Posted on June 23, 2017 in Friday Favourites with tags

It’s 2017 and we’re still finding new ways to gorge on Buffy. Here are the best things we read and watched this month. 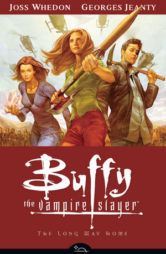 So for my birthday earlier this month a dear friend bought me the Buffy graphic novels, specifically the first ten issues of season eight. The hype was real. I zipped through them all within two days – it would have been faster but a girl has to sleep at some point – and it was great, a bit sillier than Buffy the TV  show but fun nonetheless. It features a giant Dawn (no, seriously, she is actually like twenty feet tall or something), a still one-eyed Xander, Goddess Willow, loads of Slayers, some returning foes and all the witty banter we loved from the show. I absolutely loved reading these graphic novels and I will one hundred percentage by the next volume, but it’s not like I’ve already looked at the price, saved it in my Wish List and marked my next payday or anything… 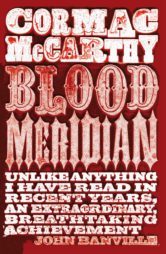 Last summer at the Hodderscape Party I asked Lavie Tidhar and Stark Holborn for their favourite novels in the Western genre. I’ve been busy with their recommendations. Lavie plumped for Cormac McCarthy’s nihilistic, poetic and gore-soaked Blood Meridian. I’m still rereading passages days later – the desert and the mountains of the Mexico-US border have never been better described. The intolerance of man to man too. Another book where the phrase ‘life is cheap’ is manifest is Stark’s choice: Patrick de Witt’s The Sisters Brothers. More light-hearted but poignant and very human, it’s a Western Odyssey of human hope, greed and regret. Two magnificent novels. To top things off I turned to a wonderful work of non-fiction, Evan S Connell’s Son of the Morningstar: General Custer and the Battle of the Little Bighorn. He brings the myth to vibrant life through contemporary eye witness accounts on both sides.  You feel you’re in the saddle with the Seventh Cavalry as they blunder into the massive encampment in the Little Bighorn Valley, and with them at The Last Stand on that dusty Montana hillside. Engrossing. 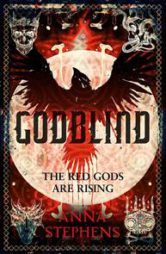 Godblind by Anna Stephens has been all over my newsfeed for what seems like the last 6 months, and with a shout line like ‘The Red Gods are Rising’, there was really no chance it would stay in my TBR pile for long, despite the flurry of work that comes with starting a new job.

The large cast of characters meant that it took me a little while to settle into the novel, but once I did I was hooked! It’s bloodthirsty, visceral and fast paced, and the large cast of characters morphs into a strength after the first few chapters, with some wonderful good guys to root for, enemies you really wish would get punched in the face and enough twists and secrets to keep you guessing right up to the end.

Oh, that torture scene. Wow. Definitely not for the faint of heart, but extremely effective! 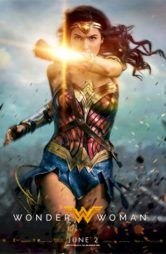 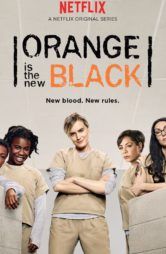 Orange is the New Black

I could not be more happy that Orange is the New Black is back on our screens. I’ve been mourning the loss of one of my favourite characters for what seems like a lot of my life, and now we see the aftermath of her death in the form of a prison-wide riot. That all sounds really dark, and it is, but there’s also a lot of humour in this season. Casting continues to blow my mind – in Daya’s flashback, we see her younger self played by the actress’ real-life daughter, and the resemblance is uncanny. I spent most of the episode trying to work out what CGI they were using. And there are twists and turns wherever you look, all culminating in an ending I didn’t see coming. I watched the entire series in less than 24 hours and I want more.