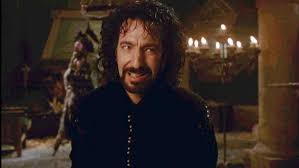 Posted on January 15, 2016 in Film, Friday Favourites with tags

In memory of Alan Rickman, who gave us villains we loved to hate.

When he called off Christmas in Robin Hood: Prince of Thieves

Alan Rickman as the Sherriff of Nottingham in Robin Hood: Prince of Thieves was truly magnificent. The nastiest, baddiest baddie with the baddest facial hair you’ve ever seen. His voice – and his facial expressions – dripped evil (and creepy lust for Maid Marion). And yet somehow, he was deeply,  deeply sexy. The moment when he orders Christmas to be called off – as a casual afterthought to cancelling kitchen scraps for lepers and orphans, as well as forbidding ‘merciful beheadings’ – is surely the zenith of his pure evilness, the height of villainy. Sherriff-1; Christmas-0.

His relationship advice in Love Actually

Alan Rickman in Love Actually is the man we love to hate. After all, he caused the lovely Emma Thompson that moment of quiet devastation while listening to Both Sides Now. But despite his obvious ass-ery (is that a word?), you can’t deny he has some cracking moments in the film, most notably the present wrapping incident with Rowan Atkinson, and my personal favourite, this pearl of wisdom that he imparts to a lovelorn Laura Linney:

When he was the (very contemptuous) voice of God in Dogma

One of the things Alan Rickman was most famous for was his ability to deliver perfectly crafted moments of contempt. The Sheriff of Nottingham, Severus Snape; but one of my favourites was always The Metatron in the theological satire, Dogma. The Metatron acted as the voice of God, because, ‘Were you to hear God’s true voice, your mind would cave in and your heart would explode inside your chest. We went through five Adams before we figured that one out…’

My favourite moments in the film are when he points out with visible contempt mankind’s inability to grasp anything if there hasn’t been a movie made about it, because he’s right! – ‘You people. If there isn’t a movie about it, it’s not worth knowing, is it?’

‘Tell a person that you’re the Metatron and they stare at you blankly. Mention something out of a Charlton Heston movie and suddenly everybody is a theology scholar.’

Perfect delivery – like he has something foul smelling nestling under his nose.

Picking one is hard, Alan Rickman helped bring my favourite childhood story to life, so I am cheating – my moments are linked. The heartbreaking ‘Always’ in Harry Potter and the Deathly Hallows: Part 2. And Snape hugged Lily’s body in front of an infant Harry. I cried like a baby.

When he got all classical in Die Hard

Alan Rickman’s turn as German terrorist Hans Gruber in Die Hard  is perfection. Sinister, suave and slightly (well, more than slightly) unhinged. My favourite moment wasn’t ‘Yippee ki-yay, motherfucker!’, it was Hans purring ‘And when Alexander saw the breadth of his domain, he wept, for there were no more worlds to conquer.’ He claims it’s from Plutarch. It’s not. Anne gives an excellent analysis of Hans’ so-called ‘classical’ education here.

Hans you pretentious little snot, I salute you. 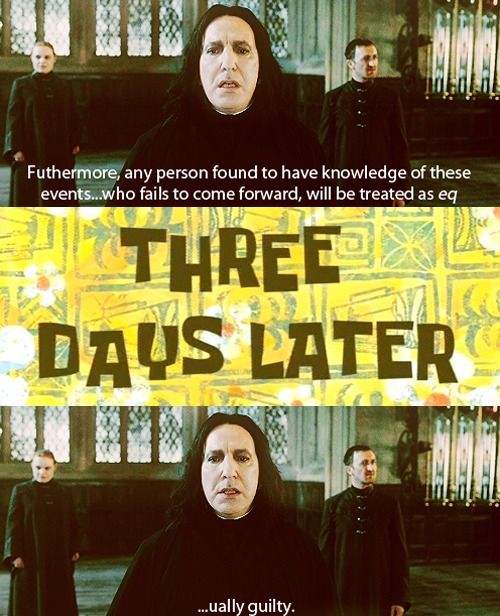 Alan Rickman had the most wonderful voice, and could make anything sound important, with his gravelly tone and his enunciation – such gravitas not to be found among many other actors of his generation. I always enjoy watching his films to see how he’s going to turn a phrase, and particularly where the emphasis is going to be in a sentence. Particularly in his role as Snape was this most visible, and many a tumblr site has been dedicated to this art. The world is an emptier place this week.

It is PHYSICALLY IMPOSSIBLE to choose a favourite Alan Rickman moment. Is it the angry moment that he grabs a photograph from a fan in Galaxy Quest? His most brilliant turn as Snape, when he grabs Harry and Ron by the head and forces them to focus on their schoolwork? (Roll up them cuffs, Snape!) This MASSIVE spellcasting duel? Every single moment he’s on screen in Robin Hood: Prince of Thieves? All of Die Hard?

I can’t decide, so I’m going to end on this sly little wink (from Prince of Thieves) and go cry some more.