Films to watch this Autumn 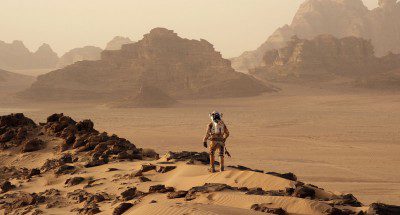 Where to get your fill of science fiction, fantasy and horror on the big screen in the next few months. Looking for something to watch from the comfort of your sofa? Check out our list of new television shows to get excited about this Autumn.

The much-anticipated adaptation of Andy Weir’s The Martian, his debut novel about an American astronaut who becomes stranded alone on Mars and must improvise in order to survive.

Michael Fassbender and Marion Cotillard take their turn as the original power couple in the latest adaptation of Shakespeare’s Macbeth.

A family living in a remote part of New England in the 17th century are thrown into despair when their youngest child inexplicably goes missing. As they hunt for the lost child, paranoia breeds within the family and the growing belief that supernatural forces are at work. This looks unmissable.

In a crumbling mansion in Cumbria, young author Edith Cushing falls in love and marries Sir Thomas Sharpe but soon discovers that her charming new husband is not who he appears to be. Mia Wasikowska is great, and I think about Tom Hiddleston’s performance in Only Lovers Left Alive at least once a day, so I can’t wait to see this.

In a dystopian future, single people are taken to The Hotel, where they are obliged to find a romantic partner in forty-five days or are transformed into beasts and sent off into The Woods. And you thought Take Me Out was harsh.

Moving to the countryside is always a recipe for disaster and in The Hallow that disaster comes in the form of demonic forest-dwellers. And also some sullen Irish people.

After that ending, the second part of Mockingjay can’t come soon enough.

In an alternate timeline where dinosaurs co-exist alongside humans, a young Apatosaurus named Arlo loses his father in a tragic accident. One day, Arlo falls into a river and gets knocked out by a rock, finding himself far away from his home. While trying to find his way back, he befriends a human caveboy.

This is giving me serious Land Before Time flashbacks. Too. Soon.

You might not have heard of this one, but apparently some people are pretty excited about it.