Posted on August 26, 2014 in Television with tags Dr Who, Science Fiction

Hero or madman? Warrior or healer? Wanderer or planner? Alien or human?

The Doctor is all of these, and each regeneration gives the opportunity to twist the dials, remix the levels of the different elements of his character. David Tennant and Matt Smith shared many common traits (+5 Wacky Hair, +10 Flirtation and +15 Youthfulness), so it comes as a bit of a shock to be confronted with Peter Capaldi (-10 Flirtation, +10 Grey Hairs, +50 Intense Stare). And Deep Breath won’t let us forget it… 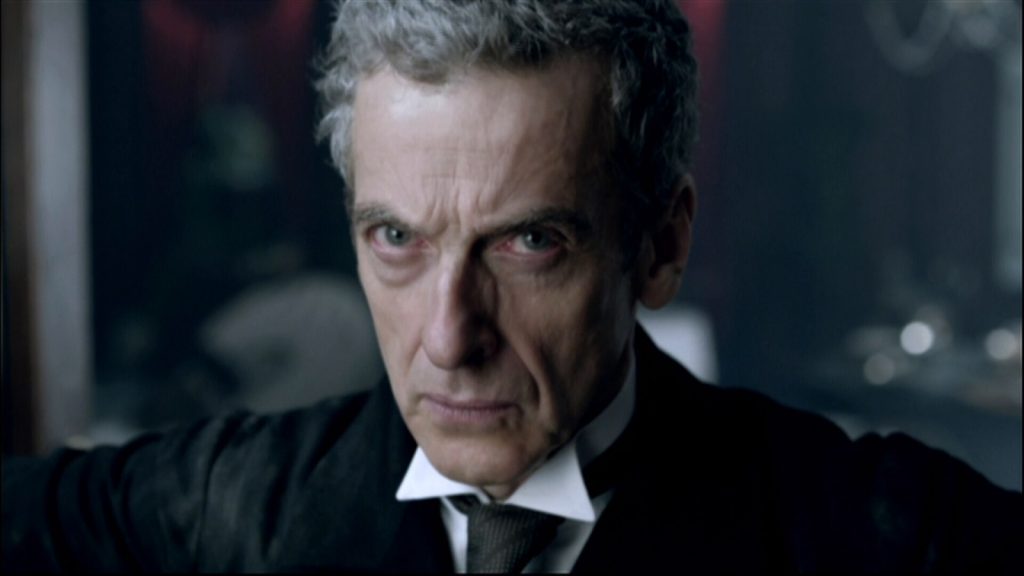 Ah, yes, Peter Capaldi. He brings a manic energy to the role, with a mad stare worthy of Tom Baker and an intensity not fully seen since Christopher Eccleston. Unlike Eccleston, who seemed to have signed on for the role of the Doctor expecting Russell T Davies to deliver meaty, social-issue led dramas and was rather perturbed to find himself chasing a space pig created by farting aliens, Capaldi seems to delight equally in scenes of drama and of comedy. His joy at being the Doctor is palpable, and he throws himself into every scene. We know that the keys of the TARDIS are in safe hands.

But first, a giant tyrannosaurus rex loose in the Thames! It sounded remarkably stompy rather than splashy, and apparently all of the fossils have shrunk in the wash since Madame Vastra was a child, but never mind such technicalities. Look! It’s in front of Big Ben, coughing up the TARDIS with a wild Capaldi inside! 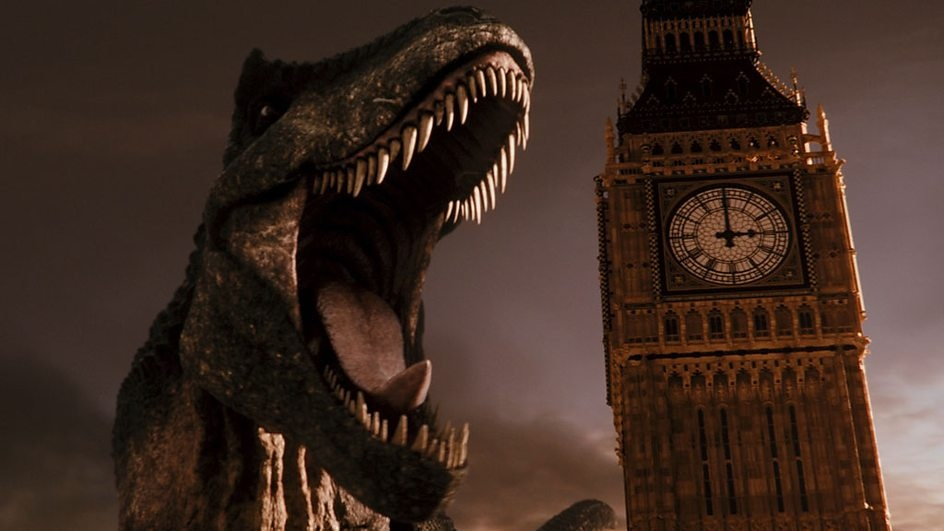 T-rex in front of Big Ben! This makes no sense, but just go with it!

New title sequence! You’ve probably heard that it was based on a design by Billy Hanshaw, whose clockwork-themed fan sequence Steven Moffat so liked he got the BBC to base the new titles around it. Since the show is at least as much about time as it is space, especially under Moffat’s writing, it seems very fitting. 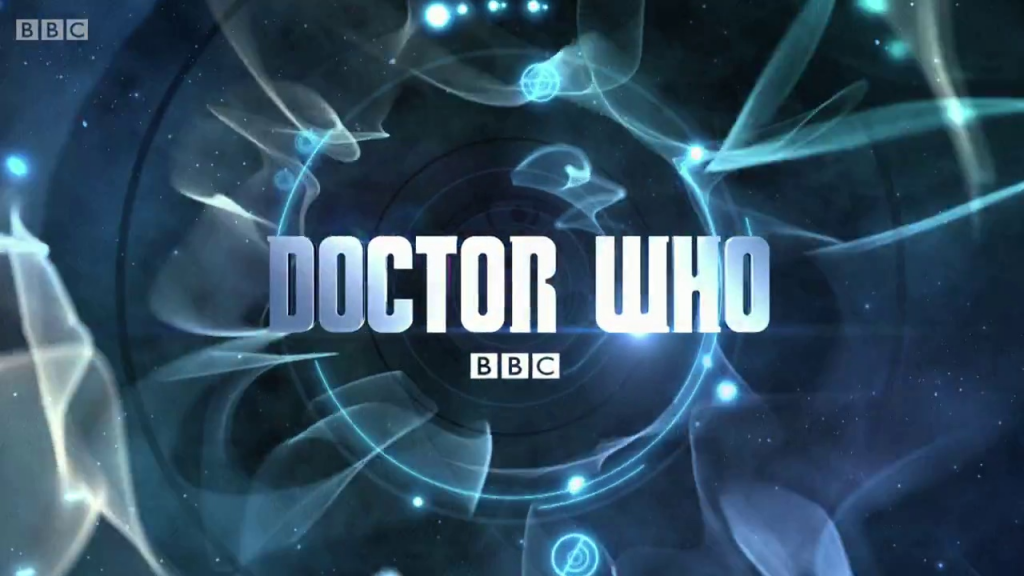 The Paternoster Gang – Vastra, Jenny and Strax – are back, on hand to help Clara deal with the Doctor’s regeneration. But I can’t help feel that these characters are wearing rather thin: they’re a lot of fun, all right, but they and the version of Victorian London they inhabit are decidedly cartoony. They’re also rather static as characters – yes, we know they’re married, how about developing Vastra and Jenny with a bit more depth? 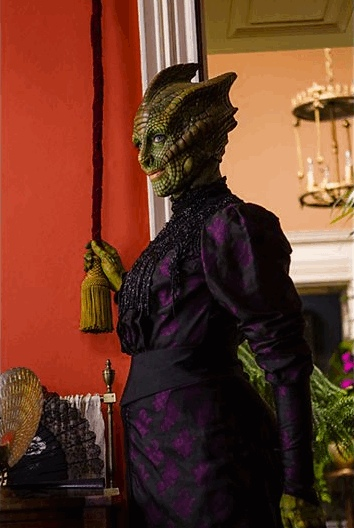 The game is afoot and we’re going to need a lot of tea.

Many of their scenes puncture the show’s already precarious believability, from Strax apparently unable to distinguish human mouth from eyes, Vastra locking her Victorian carriage with a car-alarm like remote control, to the seemingly easy acceptance of the Police Force of a lady lizard detective. Part of Doctor Who‘s appeal is its sense of humour, but personally I prefer it to at least keep a nodding acquaintance with reality as we know it.

Vastra then gives Clara a lecture on accepting the new, older Doctor, but it all seems a bit preachy and defensive, as if Moffat is using the scene to tell off fangirls for fancying Tennant and Smith. It seems odd that Clara takes to regeneration so badly, having recently met the Tenth and War Doctors in The Day of the Doctor. Of course, she’s our surrogate, and it’s designed to help us accept the new Doctor, but at this point neither Clara nor the audience have had much chance to see him in action. Rather than banging on about how the Doctor is older and lecturing us on acceptance, I’d much rather this episode had had the confidence to just get on with showing us how awesome the new Doctor is. 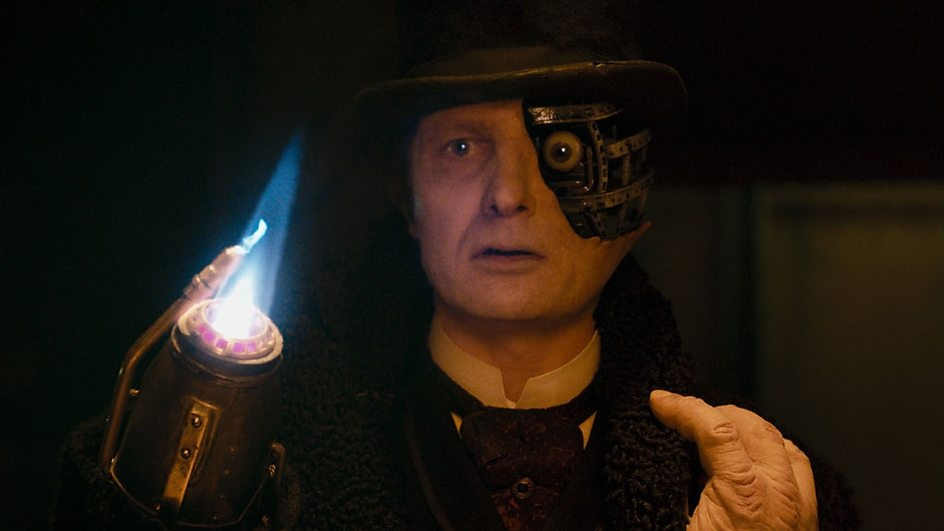 Like the Victorian Droids harvesting body parts to recycle for their ship, Deep Breath recycles previous Doctor Who story elements. The newly-regenerated Doctor collapsing and being taken to bed echoes Tennant’s debut in The Christmas Invasion, though Capaldi is having none of this being bed-ridden nonsense – “So you’ve got a whole room for not being awake in? But what’s the point?!” The clockwork droids from The Girl in the Fireplace are back. Instead of the Weeping Angels’ “don’t blink”, we have “don’t breathe”. What bodily function will Moffat use to terrify us next, I wonder – Clockwork Angels that get you when you fall asleep? Frowning Clowns that zap you when you pee? 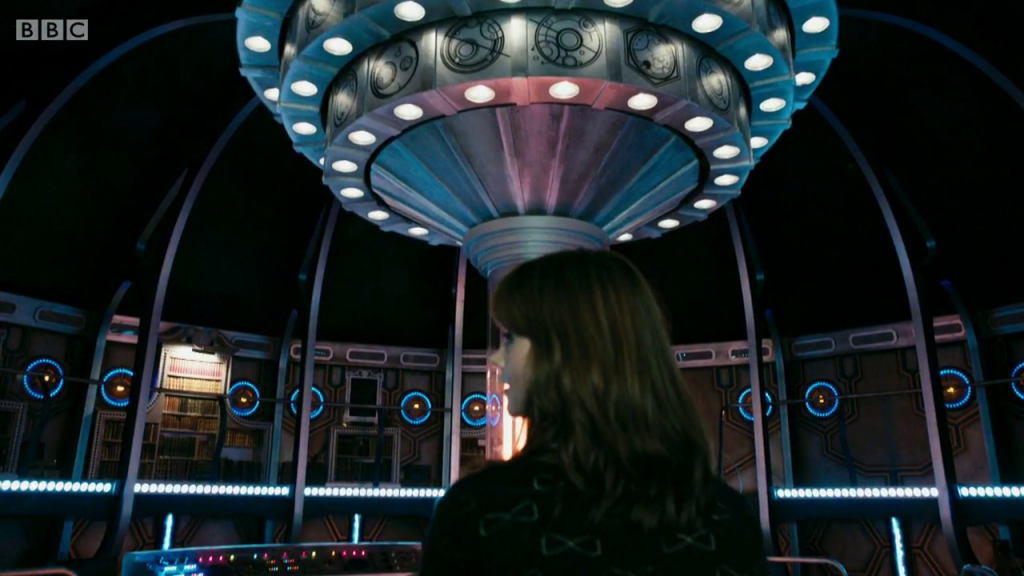 You keep reusing that line. I don’t like it.

But the recycling doesn’t matter that much when the heart of the episode is so strong, and that’s Clara and the new Doctor, and the relationship between them.

Clara’s characterisation has sometimes been a bit of a weak spot. Her mystery status as “the Impossible Girl” often seemed a substitute for actual character development, with her relatability as a companion depending on Jenna Coleman’s chirpy charm rather than the strength of the writing. This left her probably the most generic companion since the show returned in 2005 – the Doctor’s description of her as the “not-me, asking questions one” is depressingly accurate.

But here we see Clara thrown off-kilter, revealing the fears and hopes beneath the shiny, chirpy mask. Her background as a teacher actually informs her character, and Vastra’s preachiness manages to “ruffle the lake”. Her scene with the Doctor in the restaurant is great, with comedy that arises out of the characters personalities rather than silly anachronisms or artificial stupidity – “Nothing is more important than my egomania!”, she shouts (can I get that on a t-shirt yet?), showing her to be a great match for the new Doctor.

I’ve already praised Capaldi’s performance, but the success of the Twelfth Doctor’s introduction is also down to smart writing that refuses to pin down exactly how far this Doctor will go. Did the Half-Face Man jump, or did the Doctor push him? Is killing against this Doctor’s “basic programming”? 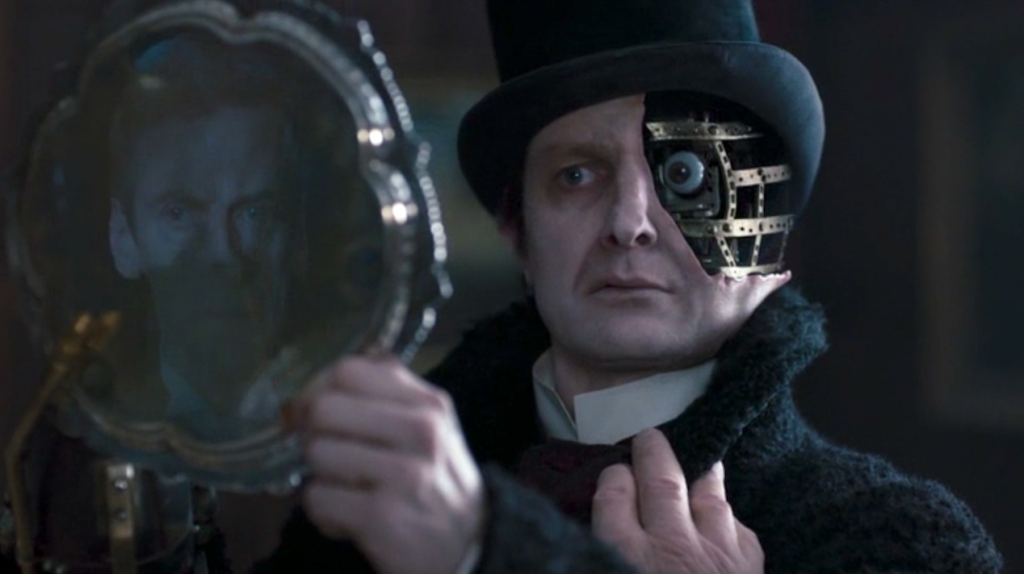 The Doctor’s past track record would suggest he is quite willing to kill as a last resort – everyone loves the scene where he asks “Have I the right to destroy the Daleks?” and forgets that a few minutes later he decided yes, yes he does and is trying to blow them all up. But as the Doctor’s story about Trigger’s Broom illustrates, he’s not the man he used to be. We – and perhaps he himself – don’t know how far this Doctor will go.

This is a necessary adjustment of the dials on the character. Back in The Day of the Doctor, the Doctor was able to save all of Gallifrey from dying in the Time War rather than making the hard choice to destroy it to save the universe. It changes him from a scarred survivor who does his best in a dark universe, to the fairytale hero who always finds a better way to save the day. That’s an uplifting and optimistic take on the show, entirely fitting for the 50th anniversary of what is after all a kid’s show.

But if the show is not to be cloyingly cosy, it needs that vein of darkness. For the show to remain dramatically tense, we need to believe that the Doctor might not win every time. For the Doctor to remain compelling, we need the possibility that he himself can be dark and dangerous. Of course, you can only go so far in that direction too – he needs to remain the hero, but by swinging the pendulum back into darkness for a time, the Doctor is compelling and uncertain as a character once more. He’s a character and not just the hero in a way he hasn’t been since Christopher Eccleston’s Ninth Doctor recovered from the horrors of the Time War with the help of Rose Tyler. 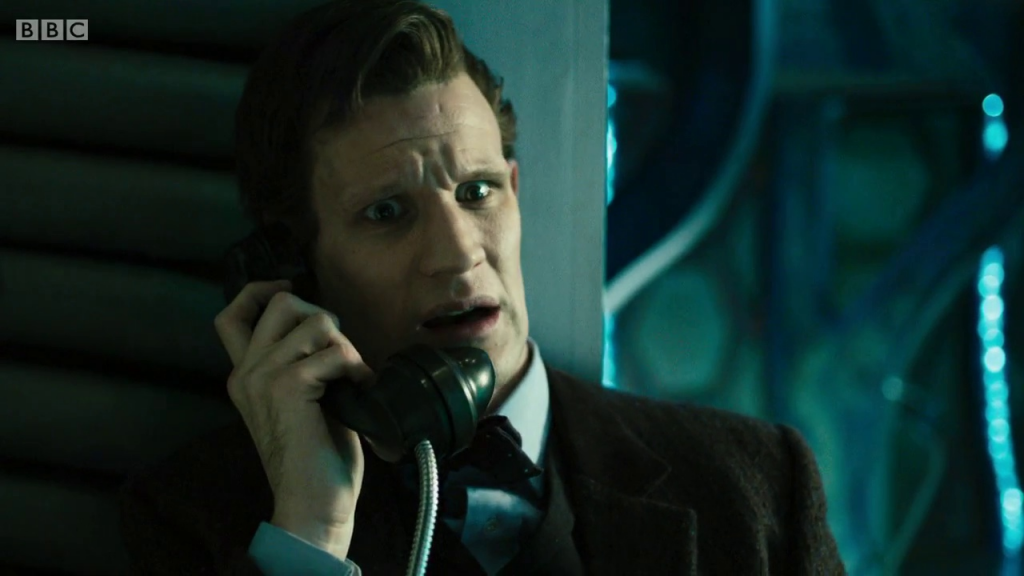 Tell me I’m not old!

The story ends with two surprise appearances: one is a warm and touching scene with Matt Smith as the about-to-regenerate Eleventh Doctor appealing to Clara to accept his new self. It goes a long way to making up for the harshness of Vastra’s lecture earlier.

The second surprise appearance is Michelle Gomez as “Missy”. She claims to be the Doctor’s girlfriend, and who might be the person who gave Clara the Doctor’s number back in The Bells of St John and who placed the advert that brought them back together in Mancini’s Restaurant.

Missy could be some completely new character who claims a relationship with the Doctor, like Tasha Lem in The Time of the Doctor. But us fans love a conspiracy theory: could she be a familiar character in a new guise? 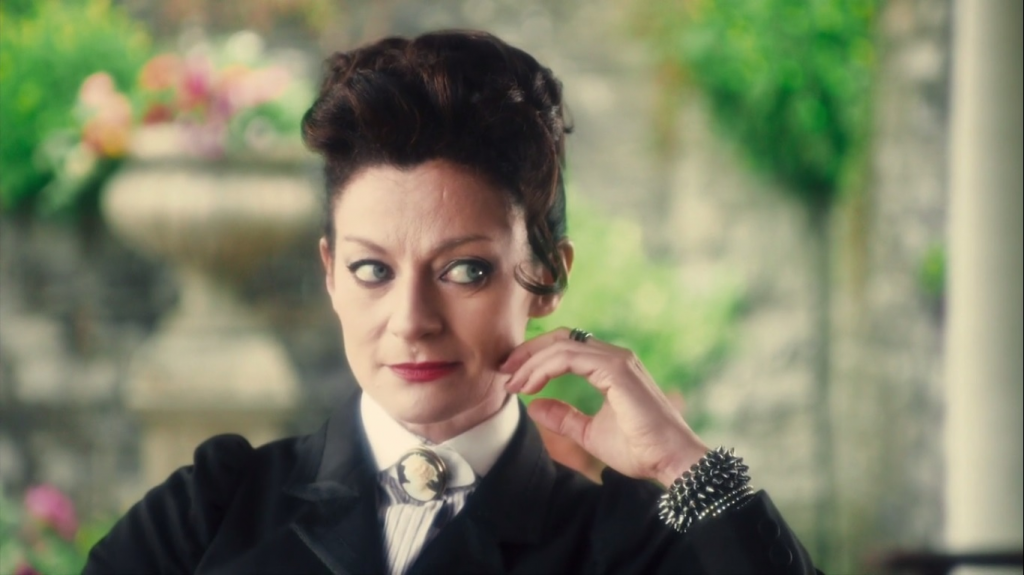 If so, there seem to me to be three likely candidates:

Other wilder theories include the embodiment of the Doctor’s mistakes, or some kind of future version of Clara.

So if the Matt Smith era was Steven Moffat’s vision of Who version 1.0, then what clues does Deep Breath give us to version 2.0? This episode has many of Moffat’s characteristic weaknesses – indulgent callbacks to past episodes, dubious sexual politics, throwaway gags that undermine the world of the story. But the core of the show is the character of the Doctor and his relationship with the companions. The best moments of Deep Breath suggest that the show has its twin hearts firmly in the right place.

How about you – what were your first impressions of Capaldi as Twelve? Did you enjoy Deep Breath‘s somewhat familiar storyline? And what are your theories on the identity of Missy?