Do you want to play a game? 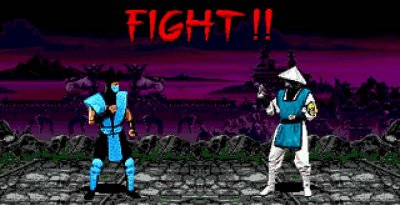 I might have deceived you with my title; this entry has nothing to do with Saw apart from the fact that I really like the phrase. This entry however, does have everything to do with games, a specific set of games in fact: Mortal Kombat. Just over the weekend I re-watched the webisodes that came out about 2 years ago, rekindling my love of all things MK – so here I am, spreading the joy to all my fellow gamers and lovers of all things great.

This legendary series of games was originally started in 1991 (almost as old as I am), since then it has grown into a monster of its own, full of in-depth feuds and stories that are consistently changing and growing. MK is one of my favourite game franchises, and I won’t be the only one to say that it really is in a league of its own. I won’t pretend I didn’t enjoy Street Fighter and Tekken, but with MK you really do get some great storylines – I’d say that it is the arcade fighting game that really appeals to us fantasy junkies… Well to my friends anyway!

If you haven’t played any of the games I’d recommend checking them out, there is a whole world of options. Also you are given little treats, especially in the newer games, where you can do MK Racing (with little mini-me versions of the main characters), MK Chess, MK Tetris and free-roaming story modes.

If you can’t be bothered to buy the game, or you simply don’t like gaming – you don’t need to miss out on the epic world of Mortal Kombat. The talented Kevin Tancharoen has teamed up with the MK creators to make Mortal Kombat: Legacy: a series of webisodes available to watch for free on YouTube. The second series will be starting very soon, so if you want to catch up you can do so here. There was also a trailer, again created by good old Kev, that put the MK universe a bit more solidly in the real world. Now this might not appeal to us as much as we really do love a bit o’ fantasy but it is also definitely still worth a watch, so you can check that out here. Unfortunately no movie was made from his attempt to woo funding, however he did manage to get the web series so it worked out well in the end.

Nothing does blood, gore and fantasy like MK, so if you’re on here reading this – it might be a good shout to have a gander!

Now for the sake of sheer entertainment I think I’m going to start a new tradition with my posts. I will end each one with a fantabulously random quote from any fantastical film (nothing is out of bounds!) and you guys shout out what you think it is. Adds a little something, don’t you think?

So here is the very first random quote, and remember to comment and/or tweet @hodderscape where you think it’s from!