Posted on November 7, 2014 in Film, Friday Favourites with tags Dinosaurs

It’s DiNovember, so we’re pick out our favourite dinosaur films! For an extra dose of dinosaur delight, check out our list of awesome dinosaur webcomics. 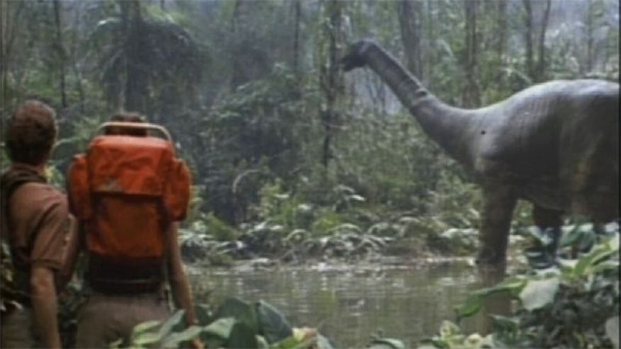 I was one of those kids who loved dinosaurs, and I mean loved dinosaurs. My plan was to be a palaeontologist and spend my whole life crouched over some dusty pit in a  desert sifting for fossilized bones. (You can see how that turned out.) Anyway, I also loved documentaries about dinosaurs, and my absolute favourite was called Dinosaur! (Yes, the exclamation point is in the title; they’re serious about their subject.) Dinosaur! Was hosted by Christopher Reeve, whom I naturally knew as Superman, and featured the best special effects 1985 could boast – which, in all seriousness, were some very lifelike dinosaurs stomping around a convincingly Mesozoic forest.

Honestly, they were the best dinosaurs out there until Jurassic Park blew everything out of the water. Perhaps not surprisingly, the effects were done by Phil Tippett (in his garage!) of Industrial Lights & Magic – the same man would go on to become the dinosaur supervisor for Jurassic Park, and who has been wonderfully good-natured about becoming a meme.

Dinosaurs! Couldn’t have said it better myself.

One Of Our Dinosaurs Is Missing

I’m really showing my age now! In 1975 (before I was born by the way) Disney released this movie, but obviously I didn’t see it until many years later. I remember the thrill of watching the ‘alternative’ car chase scene through the streets of London – replace ‘car’ with ‘lorry-holding-giant-dinoaur-skeleton-stolen-from-the-Natural-History-Museum’. It’s really the only part of the movie I remember, as nanny Hettie’s erratic driving causes many near misses and gapping mouths as the unlikely spectacle passes by. I don’t remember the end of the movie, but I do know it made me want to visit the Natural History Museum someday. Which I now have. Many times.

The Land Before Time

This film is cold. It will tear your heart out, put it back in and pretend everything is fine, and then tear it out again. If you don’t cry at least three times during this film, you are dead inside.

Always and forever shall my favourite dinosaur movie be Jurassic Park. Holy moly that is a great film. With dinosaurs that still hold up (and so very often surpass) the quality of modern CGI creatures, this film is just pure awesome. It has a great cast that fit into their roles perfectly (*ahem* here’s looking at you Ian Malcolm) and even though sometimes scientifically inaccurate (shout-out to the size of Velociraptors) the script is pretty awesome. The move has so many great scenes, it is hard to pick just one. The only solution to this problem is to love them all equally. Remember that one where Ian Malcolm seduces the world? 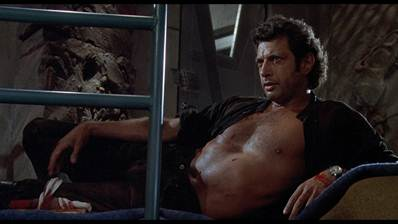 Not to mention that scene where the light filtering through the grate shows the genetic code lettering (ATGC). 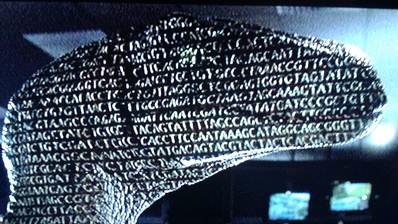 Oh, and that scene with the ill Triceratops (so often your favourite as a kid). 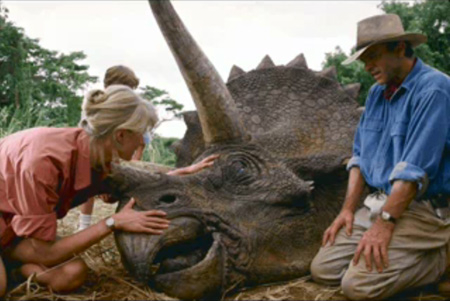 Or that one that everyone knows is the best looking scene in movie history. 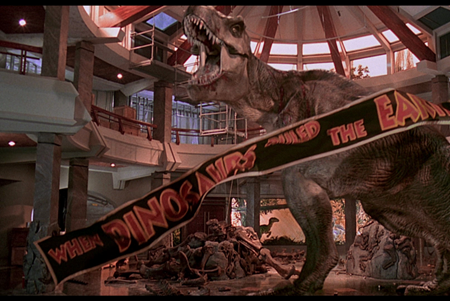 Oh my God – so awesome. I’m pretty much just giving myself a pep-talk to re-watch this movie. Yup, decision made.

In fact, I’ve made the decision that EVERYONE should go and watch this movie (again).