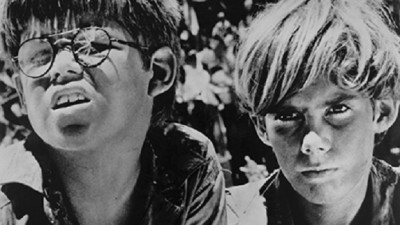 The creepy kids in Sarah Lotz’s The Three have been giving us the heeby jeebies for months, and now they’re coming to a book store near you. They join the unhallowed ranks of a whole host of children who should be neither seen nor heard, here are our favourites: 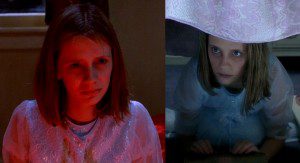 Following my mention of The Sixth Sense a couple of weeks ago in our Plot Twist Friday Favourites, I’m going to go for Kyra, the regurgitating ghost who seeks the help of Haley Joel Osment to uncover the truth about her death. As with most great freaky child characters, Kyra is both spooky and desperately sad – particularly when it turns out that *spoiler alert* she was killed by her mother in an extreme Munchausen by Proxy situation.

Confession: due to my extreme wimpiness as a child, I didn’t actually watch The Sixth Sense until I was at university, at which point Mischa Barton was one of the most famous faces on TV in her starring role in The OC, so my first reaction when she appeared on-screen with vomit dripping from her mouth was not in fact fear or shock but ‘hey, it’s Marissa!’ 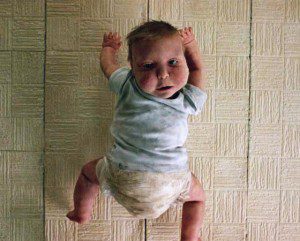 I was seventeen when Trainspotting came out, and it was the first movie of its kind I’d ever seen. I also saw it on a first date, which may have added to the, shall we say, effect it had on me. Far and away, the most memorable (and creepiest) moment comes when Renton (Ewan McGregor), while trying to kick his heroin habit, hallucinates that a baby – his friend Sick Boy’s baby, who died from neglect earlier in the film – is crawling across the ceiling of his childhood bedroom. The scene is made even creepier and more effective by the clearly-fake doll, which then stops, turns its head 180 degrees, Exorcist-style, and stares down at our addled protagonist.

It’s a powerful, unforgettable moment and somehow both weirdly funny and profoundly sad. 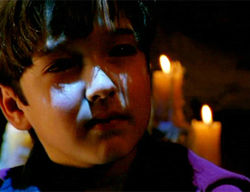 And there will be a time of crisis, of worlds hanging in the balance. And in this time shall come the Anointed, the Master’s great warrior… the Slayer will not know him, will not stop him, and he will lead her into hell.

Child vampires are creepy. Baby vampires trying to bring about the end of the world are even creepier. Alongside his much less fresh faced counterpart The Master, The Anointed One was one of the main scourges of the Slayer’s early years. Aside from wanting to drag Buffy to Hell and bring about the apocalypse, he is also incredibly creepy and suave beyond his years.

Luckily [spoiler alert] he was burned to a crisp by Spike which is one of many reasons why Spike is amazing. 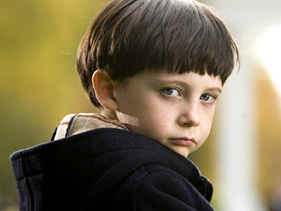 Damien from the Omen is going to have to be my favourite scary child.  Damien Thorn is literally the devil in the form of a little boy…. What could be more terrifying?!?!  I loved both the original 1976 version as well as the 2006 version.   The child actors chosen for the roles are equally scary and I’m not really too sure how his parents could feel safe around him after filming.   I’ve always thought that children are the scariest horror story villains and Damien has to be the ultimate scary child.

‘Here is wisdom. Let him that hath understanding count the number of the beast; for it is the number of a man; and his number is 666.”- The book of revelations 13:18

The boys from William Golding’s Lord of the Flies (1954) 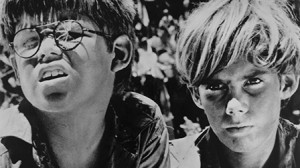 I’ve always said that a children’s nursery rhyme in the wrong place is possibly one of the scariest things anyone can imagine. I think my theory actually extends to creepy children in general, nothing is more terrifying then a murderous child – cos you know… unexpected. I was debating if I should go for the changelings in an episode of Supernatural, they are pretty creepy as they feed off the mothers of the children they are imitating whilst being sickly sweet. Instead…

I decided to go with the boys from Lord of the Flies. The descent of order and sanity that takes place in the book is terrifying simply because it is all so plausible, it is pretty scary to think that REGULAR kids, who you see wandering the street have the potential to go a bit mental.

The way the boys choose their allies and work against each other is mirrored in society today, go to a school or simply chat to a younger sibling – kids are instinctual creatures – if they don’t like or fear someone or something, you’ll know about it. Take away the order provided by an authority figure, the boys simply become the beast they imagined to exist. FYI, you wouldn’t want to be stuck alone with Jack or Roger…