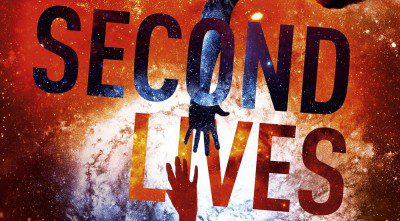 On a rainy night in present-day Cornwall, seventeen-year-old Kaz Cecka sneaks into the long-abandoned Sweetclover Hall, in search of a dry place to sleep. Instead he finds a frightened housemaid who believes Charles I is king and an angry girl who claims to come from the future. In TimeBomb, Kaz, Dora and Jana discovered that they could travel through time when they clasped hands. In Second Lives, they’ll discover that’s just the beginning of their powers… and their trouble.

We’re absolutely thrilled to be able to reveal the cover of SECOND LIVES, the explosive follow-up to TimeBomb, after the jump!

You’ve read and loved TimeBomb, the first in Scott’s brilliant time-travel trilogy (try saying that fast three times!). So we’re delighted to present the cover of the next in the series, SECOND LIVES. Where TimeBomb featured Dora, the 17th century serving maid, falling through time, Second Lives has upped everything. So without futher ado: 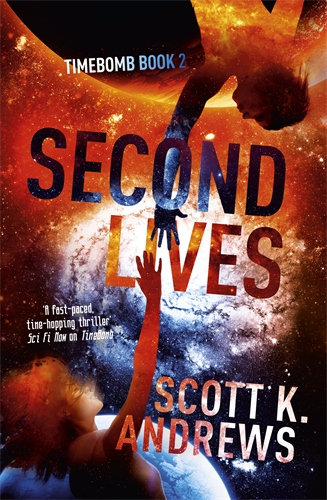 Glorious, isn’t it? Whereas TimeBomb featured one person, Second Lives features two – this time it’s Kaz and… well, who’s the girl? Dora? Jana? You’ll have to read the novel to find out. And where TimeBomb showed Dora falling from 17th century Cornwall to future New York, Second Lives presents a rather wider tableau. The art is by our own Aaron Mundey, who also did TimeBomb, and we can’t wait to see what he’ll whip up for book 3! Meanwhile, let’s tide ourselves over by learning a bit about what happens in Second Lives...

Time is in flux, and only Jana, Dora and Kaz can fix it. But can they trust each other?

It began when three people from three different moments in history discovered that they could travel through time when they clasped hands. But the mysteries surrounding them have only deepened.

Jana, Kaz and Dora have escaped from their mysterious enemy, Quil, wounded and scared. Taking refuge in a place outside of time, they devise a plan to change the past, altering Quil’s life so that she never meets them. From the streets of Beirut in 2010 to the domed cities of Mars in 2155 and beyond, the three teenagers fight for their future, and that of all humanity, by trying to rewrite the history of the person who has sworn to destroy them.

What could be more complicated – and important – than trying to save the world? As their feelings for each other grow stronger, though, Jana, Kaz and Dora find themselves at the centre of a different kind of battle. And when it comes to matters of the heart, there can be no real victors.

And there are risks to tampering with established events… timelines become snarled, histories become tangled… and one false move could destroy time itself!

Second Lives will publish in May 2016, and TimeBomb comes out in paperback on the 16th of June!