Cover Reveal: The Book of Phoenix by Nnedi Okorafor

We are absolutely thrilled to be able to share our cover for Nnedi Okorafor’s forthcoming novel, THE BOOK OF PHOENIX, today. As with LAGOON before, THE BOOK OF PHOENIX’s stunning cover is by the award-winning South African illustrator Joey Hi-Fi. We’re sure you’ll agree that this is stunning.

There is no book about me. Well, not yet.
No matter. I shall create it myself; it’s better that way.

My beginnings were in the dark. We all dwelled in the dark, mad scientist and specimen alike. A dear friend of mine would say that this time was when the goddess Ani still slept.

In the darkness I slept.

Until I woke. Until I stretched my wings.

Until the day I learned to fly.

I call my story The Book of Phoenix. 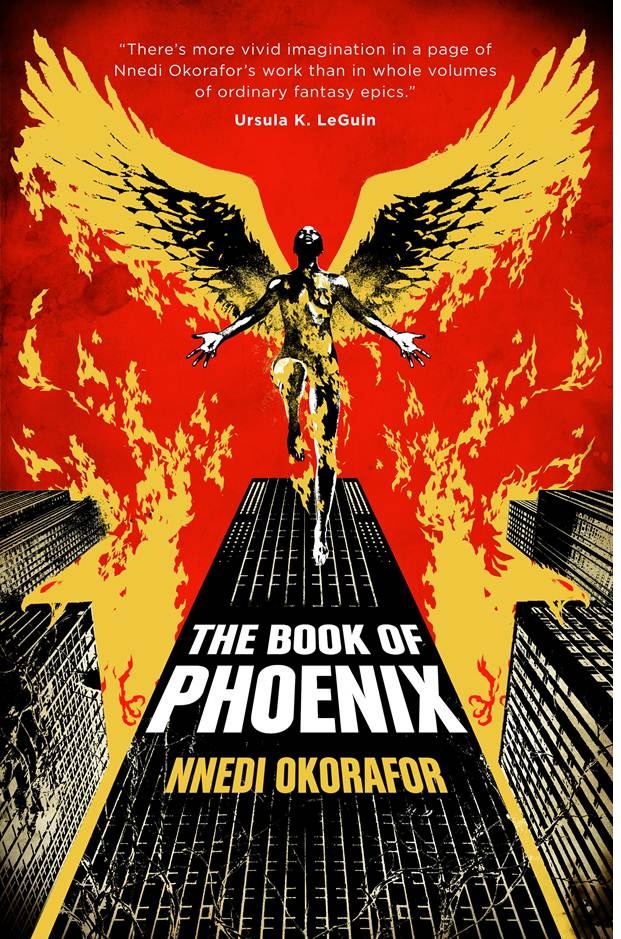 They call her many things – a research project, a test-subject, a specimen.

But she calls herself Phoenix, an ‘accelerated woman’ – a genetic experiment grown and raised in Manhattan’s famous Tower 7, the only home she has ever known. Although she’s only two years old, Phoenix has the body and mind of an adult – and powers beyond imagining. Phoenix is an innocent, happy to live quietly in Tower 7, reading voraciously and basking in the love of Saeed, another biologically altered human.

Until the night that Saeed witnesses something so terrible that he takes his own life. Devastated, Phoenix begins to search for answers – only to discover that everything that she has ever known is a lie.

And it’s time for Phoenix to spread her wings and rise.

THE BOOK OF PHOENIX publishes on 7 May!

One comment on “Cover Reveal: The Book of Phoenix by Nnedi Okorafor”