Posted on May 19, 2015 in Books, News with tags Book Covers, Frank Herbert

I must not fear. Fear is the mind-killer. Fear is the little-death that brings total obliteration. I will face my fear. I will permit it to pass over me and through me. And when it has gone past I will turn the inner eye to see its path. Where the fear has gone there will be nothing. Only I will remain.

To everyone who has contacted us to enquire about when we’ll be releasing Children of Dune in the same edition, I’m afraid to say that we currently have no plans to do so. We would love to if we could and we feel your pain about the fact that your books won’t match (seriously) but unfortunately, we do not own the rights to do so. Thank you, everyone, for your support and we’re so happy you love this cover and that of Dune Messiah.

To celebrate the 50th anniversary of Frank Herbert’s science fiction masterpiece Dune, Hodder & Stoughton have repackaged their paperback edition of the book with an all-new cover by artist Sean O’Connell. Sean is a graphic artist working out of Oregon, the same state that sparked Frank Herbert’s initial interest in desert ecology. Herbert said that the moving dunes there could  ‘swallow whole cities, lakes, rivers, highways.’ 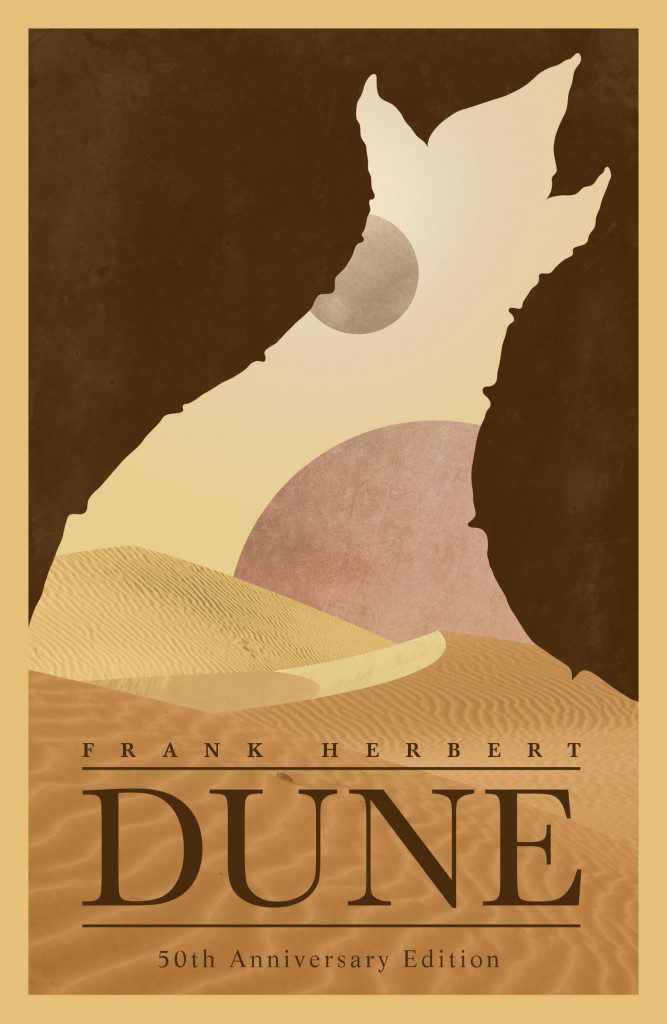 Hodder editors Anne Perry and Oliver Johnson discovered Sean’s work online. No one can explain the thinking behind his art better than Sean himself:

I was born in 1986 and spent my childhood years in Ventura, California. When I was 10 my family moved to Oregon and I’ve lived here ever since. I’m the eldest of six children and I was educated primarily at home until college. I’ve been drawing, crafting, or creating in some capacity for the majority of my life. In high school I was an avid fencer with the Eugene Fencers Club. At my peak I fenced four days a week, worked as an assistant coach, and competed on a local level. Starting college I originally intended to major in engineering at Oregon State University. At that time I barley knew that graphic design was a thing people could do. After a year of this I realized I didn’t have an interest in engineering as a profession so I enrolled at a local college in Albany, Oregon in their graphic arts program. It offered a comparable program headed by wonderful teachers, most notably John Aikman. I graduated the program in 2010 and I’ve been freelancing and focusing on art for independent video gaming ever since.

Regarding my inspiration for the cover: as it’s been a while since the original inception I’ll attempt to recall my thinking.

I’ve been a fan of Dune for a long while. It is my father’s favorite book and he was the one to introduce the universe to me. We’ve had many a discussion on the Dune universe. My inspiration for the cover design stemmed from my love of the concept of a thing within a thing. The ever-present theme of wheels within wheels in Frank Herbert’s writings are a good example. The underlying theme of Dune is ecology and the relationship of the desert with the spice, the spice with the sandworms, and the sandworms with the desert. Even beyond all the political intrigue and the concept of a galactic economy being dependent on once very scare resource. I had the idea of the sparse desert landscape with the moons. It’s a classic landscape of Arrakis. I put the scene within a reverse silhouette of a giant worm to show that the desert exists because of the worm but also that the worm exists because of the desert. To look at the illustration I hoped to created the illusion that you could not focus on one aspect of the image for too long without seeing the other. With this dichotomy of imagery presented on the cover, perhaps the reader will be prepared for the intriguing themes held in the pages it contains.

We are absolutely delighted to feature Sean’s brilliant work (we found him online!) and could not be prouder to present our 50th-anniversary edition of the greatest science fiction novel of all time, newly reset and featuring this glorious new artwork, to a new generation of readers. Dune will publish on 16 July!