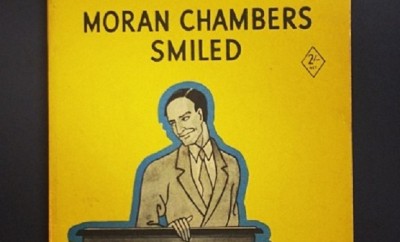 E. Phillips Oppenheim was a blockbuster author in his day. He wrote more than one hundred and fifty novels in a number of genres, and more or less invented the ‘rogue male’ adventure story that would evolve into the modern-day spy thriller. PG Wodehouse even dedicated a book to him.

So why haven’t you ever heard of Edward Phillips Oppenheim? Well, to put it bluntly: he died a long time ago and he wrote potboiler bestsellers.

That said, any trip to a used bookstore will turn up a number of Oppenheim’s works – indeed, I’ve even found books he owned at one of the Charing Cross Road bookstores. And yet, mention the name ‘E. Phillips Oppenhem’ in casual conversation and you’ll get only blanks stares. Many of the bestsellers of Oppenheim’s day have similarly been relegated to the dusty bottom shelves of used bookstores. Robert W. Chambers, best remembered today for his one-off Lovecraftian short story collection, The King in Yellow, achieved nearly John Grisham-esque levels of fame and fortune in his day, almost entirely off the back of his potboiler romance novels.

That’s the history lesson aside. Now for today’s Classic Cover: Moran Chambers Smiled. Another fabulous Hodder Yellow Jacket paperback, this particular impression dates from 1954, although the first edition was published in 1932. The art is simpler and more stylized than we’ve seen before, and that, as well as the man’s suit and hair, suggest to me that it dates from the original 1930s paperback publication. The art doesn’t tell the potential reader much about the book itself, beyond suggesting that the gentleman depicted (smiling) may be the Moran Chambers of the title, and that he’s in some sort of trouble from the law. He appears to be seated in a defendant’s chair. Or maybe he’s standing at the top of a flight of stairs? Who  knows! The line drawing is repeated on the title page, to rather more sinister effect.

There’s almost no information about this book to be found online, besides an alternate name, The Man from Sing Sing, which might possibly have been the American title. It’s a better title, to be sure, and tells the reader that this book is, indeed, about a prisoner. Beyond that, however, there’s little more I can tell you. But next time you need to stump an annoying know-it-all, mention E. Phillips Oppenheim, and see what happens. 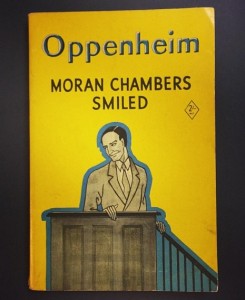