Classic Covers: from the Hodder archive

Posted on October 22, 2013 in Books with tags Book Covers

Today’s covers are, respectively, the hardback and paperback editions of Bar-20, one in a long-running series of westerns by Clarence E. Mulford, featuring none other than Hopalong Cassidy.

The hardback edition is undated but is likely from the 1920s, (Bar-20 was first published in 1921)and features, among other delights, a gorgeous title page: 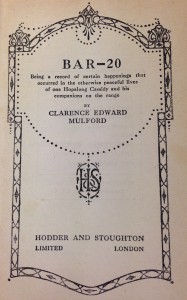 But I’m particularly pleased to have both the hardback and the paperback editions available to compare. (Paperback on the left.) 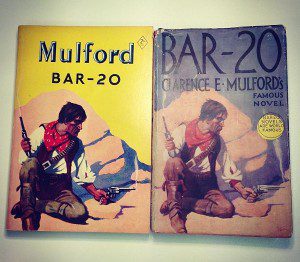 The paperback dates from 1954 and is in fantastic shape. And, from both, I learn that Hodder Towers used to be located in Warwick Square (Now Warwick Lane), near St Paul’s Cathedral.