Posted on November 25, 2013 in Film with tags Backchat

Welcome to Backchat, a new Hodderscape feature in which two (or maybe more) of us discuss a film or tv show. This week, Sharan and I will be considering this summer’s mega-robot versus mega-monster smashup Pacific Rim.

Anne: So, I finally saw Pacific Rim this weekend! And I have to admit, I was a little disappointed. I mean, the monsters and the giant robots were great! But, otherwise… well, it left me a little cold. Sharan, you really liked Pacific Rim, didn’t you?

Sharan: Loved it! Though I’ll submit to the fact that if you’re looking for something with more depth, it’s probably a good idea to shop somewhere else… But I think it does what is says on the tin really – lots of action, great CGI and of course the giant monsters versus the giant robots! I love a film that doesn’t pretend to be more than what it is.

Anne: That’s totally fair. It  promises giant monsters versus giant robots, and boy does it deliver! Of course, I’m always going to sympathise with the monsters, so I felt kind of bad for them. They were really cute. And the concepts were spectacularly bonkers: faces within faces; glowing blue acidic sputum; lots of tiny eyeballs everywhere. They were great! The robots were a little less inventive, though; they felt like equal parts Power Rangers and Iron Man (enbiggened). Which sort of encapsulates one of my issues with the film, which is that it was exactly the sum of its parts, no more and no less. Everything felt borrowed from some other movie, down to the soundtrack (which was sort of Generic Action Film Score # 12 to my ears). I mean, that’s not necessarily a bad thing; as everyone keeps reminding us, there’s nothing new under the sun. But it all felt sort of aggressively unnew, if that makes sense. 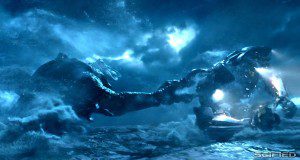 Sharan:  I get what you mean, there is a sense of repetition when watching it. Though I think you touch on a good point, it is a sum of its parts – however I think that is one of the reasons I liked it. It combined things that I really loved from other films – the great CGI from Transformers for the robots, and the amazing CGI from Avatar for the monsters. It also drew on the cognitive connection between human and host from Avatar, but transferred that connection to the robots. I think that change and new ideas are born of the old, so Thesis > Antithesis > Synthesis. For me this film is the Synthesis of Avatar and Transformers – two completely different movies which both have great effects, combined to create something which is not all-together new, but something parallel to new… new-esque!

Anne: Well, I can’t argue with that! What were your favourite bits? I loved the scene where Idris Elba emerges from his Jaeger backlit by the rising sun and young Mako is, like, whoa. We are all like, whoa. And I loved all the attention to detail, like the random toilet (in that part that required a random toilet) and Hannibal Chau’s awesome shoes. I need clinky shoes. 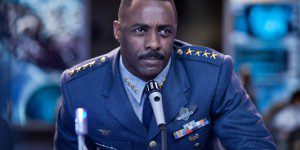 Sharan: Who doesn’t need clinky shoes? I do think some of my favourite bits are bits that only can be experienced in the cinema, so one was where little Mako is walking holding her shoe and then has to run for her life from Onibaba – I thought it was surprisingly well made! Though I have to say my favourite scene was definitely when Otachi grew wings, I was with my friends in the cinema and it just looked so great we literally just heard each other mutter ‘Ohhhhhh yes!’ Lame, possibly. Awesome, definitely!

Anne: Nope, we had exactly the same reaction! ‘Oooh, they can fly!’ That was a great moment. And there were a few other ‘ooo, cool!’ moments, too!  Though we did wonder why it took 3/4s of the film for the Jaegers to start deploying their own weapons, rather than using fistfuls of cargo containers and big ships as swords. I mean, if Gipsy had a sword the whole time, why’d they spend so many fights not using it? So my ‘ooo, cool’ moment with the chain sword was a little tempered. I imagine seeing it in the cinema would have really helped with that; it’s much easier to get swept up in pure spectacle when that spectacle’s being delivered in Dolby Surround Sound. Right, well, we should probably wrap this up. Any last thoughts?

Sharan: I do think it was helped by the cinematic experience. A robot with a sword pretty much always gets my vote, even if they are a bit delayed with using it. I think we pretty much got Pacific Rim down to a tee, a film worth watching if you go in with no expectations – enjoy the spectacle! 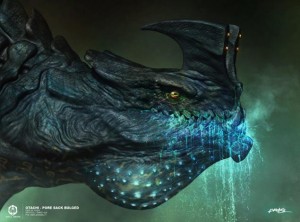 We hope you’ve enjoyed our Pacific Rim backchat! How did you feel about the film? Was it everything you hope for in a movie? Or did you find it left you a little cold? Or both? (We are sophisticated, modern viewers, after all; we contain multitudes!) Next  time, Sharan and I will be tackling the fairytales-in-the-real-world-well-sorta show Once Upon a Time, which we both like (with some reservations). Stay tuned!