Posted on December 7, 2015 in Books, News with tags Daniel Polanksky

We have a really exciting special announcement today… Back in September we told you about The Builders, Daniel Polansky’s brilliant new novella from Tor.com. Today we’re thrilled to share that Jurassic London will be publishing a limited edition hardback of The Builders, featuring brilliant new art from acclaimed artist Howard Hardiman. Read on to get a preview of this lovely little book…

Jurassic London are delighted to announce an illustrated special edition of Daniel Polansky’s acclaimed The Builders, for release next Spring.

The novella, by the author of the Low Town trilogy, is a harrowing tale of bloody revenge – featuring a host of feisty woodland critters. It has been previously published as an ebook by Tor.com, and the special edition will be its first appearance in print.

As the author notes:

“Is it hyperbolic to say that the release of this special edition of The Builders is most exciting thing to happen to me in my career as a writer? If anything it is insufficiently so, since, really, this is the most exciting thing which has ever happened to anyone, ever, or at least since the first caveman showed the second caveman this fire thing he found out. THERE IS A PICTURE OF A BADGER WIELDING A MACHINE GUN. What more do I need to say, really?” 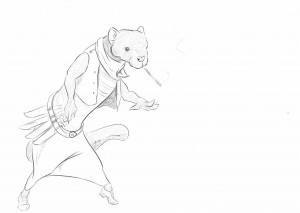 The Builders will be available as a hardcover, limited to 75 signed copies. It features, as Polansky alludes above, over a dozen illustrations by Howard Hardiman.

Howard Hardiman, the creator of the acclaimed comic The Lengths, as well as the exhibitions Line & Shade and Mythology (currently on display at Brading Roman Villa on the Isle of Wight), adds:

“I’m never going to complain when someone comes to me asking me to draw cute animals doing strange things. A fox dressed as Mae West? Billy the Kid as a mouse? An opossum sniper hanging from a tree with a poncho and a sombrero? Who could say no to varmints as pesky as these?”

Ed note: click on the sketch at right to get THE FULL AWESOME.

The Builders is printed on 120 gsm paper, complete with coloured endpapers, ribbon bookmark, and, of course, the signatures of both the author and the artists. Pre-orders will be available from February 2016 through www.jurassic-london.com, with the book shipping in April.

For more news of The Builders and other limited editions, please join the Jurassic London newsletter.

One comment on “Announcing Daniel Polansky’s The Builders – a limited edition!”