Hodder & Stoughton are delighted to announce that Anne Perry has acquired rights to a three-book Young Adult series by James P. Smythe. The deal was negotiated by Sam Copeland at Rogers, Coleridge & White.

Centuries ago, the Australia left a dying Earth in search of an inhabitable planet its colonists could call home. But no such planet was ever discovered. Law and order gave way to rioting and chaos as gangs began battling for control of the ship and its dwindling resources, and the Australia was left to drift, directionless, through the emptiness of space. Seventeen-year-old Chan, fiercely independent and self-sufficient, keeps her head down and lives quietly, careful not to draw attention to herself amidst the violence and disorder. Until the day she makes an extraordinary discovery – a way to return the Australia to Earth. But doing so would bring her to the attention of the fanatics and the murderers who control life aboard the ship, putting her and everyone she loves in terrible danger. And a safe return to Earth is by no means certain.

James P. Smythe is the award-winning author of The Testimony, The Explorer, The Echo and The Machine. The Guardian described him as ‘a young writer with a preternaturally powerful and distinctive voice,’ and reviews have compared his writing to that of JM Coetzee, JG Ballard and Kazuo Ishiguro. In addition to his novels, James also writes a well-regarded series for the Guardian, ‘Rereading Stephen King’, in which he has been tackling every King novel in order of publication. James is also teaches creative writing. 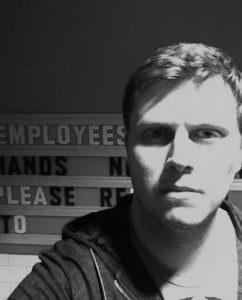 James’ agent Sam Copeland remarked, ‘I am delighted by this new deal for James Smythe. James is one of the most talented young writers in Britain, and he has now shown himself to be one of the most diverse. He has extraordinary range and it’s incredibly exciting to work with him.’

Of the deal, Anne Perry says, ‘James is one of the most exciting authors working in science fiction today, and I couldn’t be happier that he’s chosen to publish his incredible YA/crossover series with Hodder. Chan is an unforgettable character, the Australia an unforgettable setting, and The Burning Depths an unforgettable nightmare journey into a terrifying but all-too-believable future.’