All About The Cake 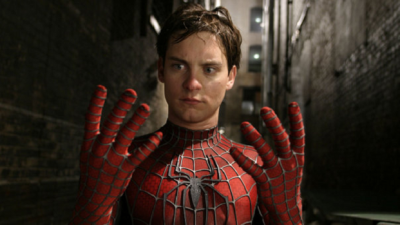 It’s the cake that intrigues me. After all this time.

There’s Peter Parker, in the middle of his studies. He’s decided not to be Spider-Man for a while, so that he can get his life back together. The daughter of his skinflint landlord, Mr Ditkowitz, knocks on his door. She’s brought him a glass of milk and some chocolate cake. The girl clearly adores him. Does Peter want some of the chocolate cake?

Yes, he decides, he wants some very much.

This scene appeared on our cinema screens nine years ago, in Spider-Man 2. Although it’s since been superseded by The Dark Knight as the best comic book movie ever made (*I want a nice clean fight below the line, now*), I’d have to accept that Sam Raimi’s sequel has a lot more heart than Christopher Nolan’s Bat-tacular.

That cake scene, though. It’s such an oddity. What does it mean? Is it just a piece of cake? Or is it a slice of a bigger picture?

Does that piece of cake signify that Peter’s learning to let go and enjoy himself?

Or does it caramelise the idea that Peter can have a pop at the landlord’s daughter as well as pursuing his dream girl, MJ… Crudely put, that he can have his cake and eat it?

Can we read something else into it – that maybe allowing this little scene meant Sam Raimi was becoming comfortable with no longer being a cult director, but a mainstream, A-list blockbuster purveyor? Was he allowing himself to have a play with the big kids in the yard, putting his own personal stamp on his work? Did he foresee his stream coalescing with Steven Spielberg’s in the gents’ at the Oscars, perhaps?

I’m fascinated by the cake. It must mean something, even if it does in fact mean nothing, and a cake is just a cake.

We can only wonder. But I’m amazed that little scene was kept in such a long movie. I think we’d already seen Peter Parker loosening up a bit, casting off the burden of being Spider-Man, enjoying his studies, paying closer attention to MJ. The cake scene wasn’t really necessary. I would have said  it maybe means that Peter can do it all, carrying off his studies and having a normal life as well as being Spider-Man… if it wasn’t for the opening part of the movie which proved it was beyond him.

For a writer, it’s this little oddity, this weird touch, which struck me more than any charging Evil Dead-style camera movies or supercharged slapstick action scenes. Here was a storyteller making his own quiet statement, in his own personal style. Those little quirks, the footnotes, the asides, the weird characters… ultimately these help our fiction to stand out that little bit more, to allow people to take notice of our narratives. It’s our own personal stamp, for better or worse.

We all know that deviating from set formulas can lead to trouble, but sometimes it creates magic. We have to allow our unique touches a little bit of space. Peter Parker and the Piece of Cake could easily have been sliced out of that movie, but it’s a terrific little episode, and it’s the first thing I think about whenever someone says Spider-Man 2. As another character said in another comic book movie from a long time ago: “I don’t know if it’s art – but I like it.”

We shouldn’t have too much cake – it is, after all, an indulgence, and the worst of these are often our undoing. But everyone likes a little slice now and again. Eat up.

2 comments on “All About The Cake”