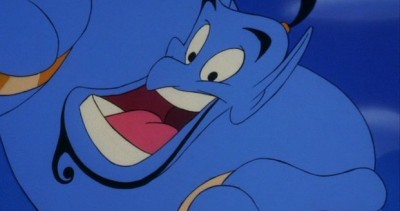 Following The Little Mermaid and Beauty and the Beast, Disney looked like it could do no wrong. And Aladdin, its next animated feature, looked like solid gold. It took place in a non-European setting, it promised to feature songs by the same writing team as had turned the previous two films into musical monsters, and it starred Robin Williams – then at his peak fame. 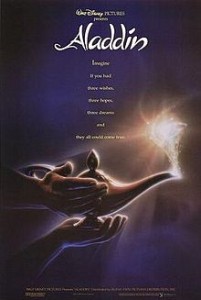 And Aladdin didn’t disappoint. The music was wonderful, a high note to end Howard Ashman’s career. The animation was gorgeous, with the direction demonstrating the same gravity-defying creativity that made The Little Mermaid and Beauty and the Beast such stand-outs. The villain was properly frightening, the princess spirited, the hero cheer-worthy, and the genie… ah, the genie. It’s said that Williams ad-libbed a lot of his dialogue, and his trademark joie de vivre is infectious.

In the twenty-two years since it first premiered, Aladdin has come under fire for problematic depictions of race; famously, lyrics in the opening song had to be changed (and with good reason). Other controversies have dogged the film, but they can’t detract from what was, in 1992, an astonishingly beautiful movie, boasting a cast of characters of colour and a setting rarely seen in a big-budget release, live-action or otherwise. Twenty-two years later, we’re still struggling with questions of diversity and representation.

Further cementing Aladdin in the hearts and minds of the kids of 1992 are its many, many shout-outs to Raiders of the Lost Ark, everything from the way the opening scene is shot to the fact that the same voice actor provided the voice for the monkey in both films.

Like The Little Mermaid and Beauty and the Beast, Aladdin shows signs of age. Some of the jokes fall flat, or don’t make sense out of context anymore. The representation of people of Arabic descent is often less than progressive. But the movie remains one of the great animated films of the twentieth century, and a joyful testament to the power of friendship.