A Trip to the Isles with Iain Banks 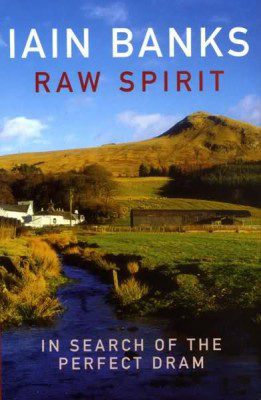 If someone were  to ask me what the most fascinating trip of my publishing career has been, I would without hesitation opt for the two days ‘researching’  with Iain Banks, his first wife Annie and photographer Martin Gray on the Hebridean islands of Islay and Jura in March 2003.

The book was called Raw Spirit (2003), was subtitled ‘In search of the Perfect Dram’ and was nearly over as soon as it was commissioned.

Iain’s other books showcased every facet of his writing ability: his mordent wit, flashing dialogue, and poetic description. His other books had autobiographical notes, too – but Raw Spirit was the one that came closest to full autobiography.

The Iain of Raw Spirit is Iain, the then-lover of trains, planes and automobiles (he later went carbon neutral and abandoned his former petrolhead existence). Of the many cars he then owned, the Land Rover Defender and not his old Jag, which we had used on a previous trip, was sitting on the tarmac of the tiny Islay airport when my plane touched down. The Defender was much better suited to the ruggedness of the terrain than the Jag.  Besides, the Jag’s loose rear view mirror had a habit of dropping down until it pointed squarely at the driver’s groin area, much to Ian’s delight: ‘Objects in the mirror may be larger than they appear,’ he roared with laughter — always a man of quicksilver wit.

Second, the Iain of Raw Spirit is Iain the socialist and political activist: the Second Gulf War had begun days before and Iain had cut up his passport and sent it to No 10 as a protest. The Defender was bedecked with anti-war posters. He was going to make his protests felt even if, for much of the time, the only audience were the red deer that outnumbered the population of the islands by about 10 to 1.

Third, the Iain of Raw Spirit was the Iain who loved maps. He had a huge collection in his home in Fife. Two of his favourites were the OS Landranger maps of Islay and Jura; the unfolded Jura like the jagged flint head on an ancient dagger stabbed at the shores of Argyll. So a necessary prelude to the Raw Spirit journey was studying the maps: any trip with Iain had to adequately prepped.

The Islay landscape was as raw and wild as the maps promised. ‘Great gulfs of view’ he wrote in Raw Spirit, unfurled over moors, charged with newly blooming whin, bogs and lochs. The roads made their lonely ways over a rocky landscape unchanged it seemed since the beginning of time. We gave a lift to an ancient bearded man who was wearing a sheepskin cloak and carrying a staff. He claimed he was studying the early Christian settlements of the Hebrides, but you could believe he was not so much a student as one who had come from the distant past.

The project nearly came to a dramatic end on our first outing, and Raw Spirit recollects a couple of hairy moments on the road. One of them occurred as we approached the tiny capital of Islay, Bowmore. Iain (stone cold sober, despite the nature of the trip) who  was expatiating on the heat exchanger which directed waste heat from the distillery into the municipal pool, took both hands of the wheel of the Defender, which nearly left the road and deposited us in Loch Indaal.

The second moment that nearly brought the book to a premature end came in the very first distillery we visited. Through the good graces of our host, Toby Roxburgh, we had been introduced to the manager of the Ardbeg distillery, Stuart Thomson, who allowed us to taste two whiskies from the cask. And two of the most awesome whiskies they were, particularly the last:

‘I look at the empty glass, then at Oliver the Editor.
“This is the best whisky I have ever tasted,” I tell him.
“You mean we’ve found the perfect dram?” He looks worried. “This could be a short book.”
I smile at Stuart and nod at the cask. “Is it possible to buy any of –?”
Stuart is already shaking his head. “All already spoken for, I’m afraid.”
I nod sadly and tell Oliver, “I think the search has to continue.”
“Your readers will appreciate the efforts and sacrifices you’re so determined to make for them.”
For a moment I think I detect a hint of irony, but surely not.’

If the day before had been the beginning of a liquid quest, the next day, after a quick boat trip across the Sound of Islay, was a literary one. The island of Jura is home to only 188 people and is one of the most uninhabited places in the UK. After a quick visit to the Jura distillery we followed the single track road north east up the coast to a place that few have visited. Eighteen miles of mostly unmade track, the Old Defender rattling and shaking like an iron bucking bronco , Scottish indie rock (of which Iain was strangely fond, as was Martin who turned out to be a friend of many of the musicians we were listening to) blaring on his iPod (new technology then!). Objective:  Barnhill, the lonely, whitewashed farmhouse standing on the northern rim of the island where one of Iain’s literary heroes, George Orwell, lived in the last years of his life and finished 1984.

Jura, island of raised beaches, referenced in The Crow Road: ‘we walked where the ocean swells had crashed until the land rose, and touched rocks two and half billion years old; half as old as Earth itself; a sixth of the age of the entire universe … Time was Magic’. We came over the last rise: the whole of the southern gulf opened to view. The Old Defender gave its last wheeze and with it, thankfully, the music also expired. A gaggle of geese, survivors perhaps of Orwell’s flock, honked at us querulously, but that was the only sound. It was difficult to imagine a dying man living in this lonely place writing his masterpiece; difficult to imagine his only egress to the outside world the 18 miles of unmade and single-track road which we had just navigated — and Orwell had had only a motorbike. There had been a choice here, Iain reflected, for little was known of TB at the time and Orwell, worried about infecting others, had sequestered himself. Sadly we were not able to get the key to the house as the housekeeper was away. We had to content ourselves peering in and admiring Orwell’s typewriter, which sits in a front window to this day.

Hidden from view just over the hill from Barnhill was the Gulf of Corryvrecken, home of the world’s third largest whirpool. Iain’s dad had worked for the Admiralty and had told him it was one of the ten most dangerous navigation hazards in all the oceans. Orwell was sucked into it not long before his death. In full flood the roar of the maelstrom can be heard for miles around; ‘the sound of Jura’ it’s called in The Crow Road. But that day, in that long ago perfect spring, the shining sea was smiling and calm and we still had miles of track to retrace and the last ferry was not many hours off. Corryvrecken was left for another day.

Yes, it was beautiful spring time weather, unseasonably so. The surreal war came to our TV screens every night; cruise missiles flying over Baghdad streets, flashes, explosions, Armageddon … but on Toby’s farm, silence and peace reigned. And, in the clear night air of Islay, Iain stared up at a sky more full of stars than he or anyone could count in a lifetime.

For an obituary from his friend, Ken MacLeod: http://www.guardian.co.uk/books/2013/jun/10/iain-banks-ken-macleod-science-fiction

For The Daily Telegraph Obituary:  http://www.telegraph.co.uk/news/obituaries/culture-obituaries/books-obituaries/10108884/Iain-Banks.html