To celebrate the publication of A Man Lies Dreaming in paperback, we look back at Lavie Tidhar’s three loosely-related novels of the twentieth century – Osama, The Violent Century and A Man Lies Dreaming. What do these novels have in common, and what are they saying about the blood-soaked hundred years that kicked off in 1914? Is there any hope for us?

Lavie Tidhar is an inconoclastic writer of the rarest sort: he tackles subjects so difficult they’re almost impossible to write about – terrorism, world war, the Holocaust – without resorting to the saccharine or the maudlin. Using an unmistakably 20th century style, the structure and the language of film noir and pulp fiction, Tidhar digs into the meat behind the answers to impossible questions. In Osama (2011), his World Fantasy Award-winning novel, Tidhar created a world where 9/11 is one event of many in a long-running series of pulp novels starring the vigilante Osama Bin Laden, allowing Tdihar to question not only our modern relatinship with terror and terrorism, but with guilt and survival. What does it mean to have lived through the 9/11 bombings and the subsequent war on terror – not just for the politicians, the soldiers and the surviors but for all of us, scattered about the fringes of unimaginable tragedy but no less affected by it? 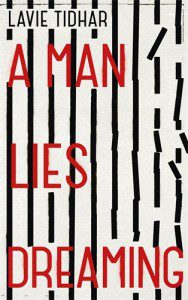 Tidhar raises the stakes with The Violent Century (2013), his stripped-down noir reimaging of the bloody 20th century. There, the question repeated over and over again was this: what makes a hero? Tidhar pulls the question apart and uses not just noir and pulp to answer it, but that other uniquely 20th century invention, the superhero comic. The Violent Century features a world much like our own but with a single, key difference: a few men and women who, by virtue of an experiment gone wrong, are gifted (or cursed) with phenomenal powers and near-immortality. How would the wars and tragedies of the last century have been any different, if superheroes were real and walking amongst us, he asked. Would things have been any different at all?

With A Man Lies Dreaming, (2014), Tidhar brings his investigation of the last century to a head. A Man Lies Dreaming is two stories about two men. The first is Wolf, a German refugee, once a powerful, charismatic leader, now forced out of his country and living in squalor in 1930s London as a low-rent PI. He’s a hateful, hate-filled monster, articulate and charismatic and burning with thwarted ambition and bitter resentment. Drawn into a set of interrelated investigations – the search for a missing woman, an assassination plot, and a series of brutal murders, among others – Wolf naivigates a filthy, stinking city on the verge of a fascist revolution.

But A Man Lies Dreaming isn’t just Wolf’s story. Indeed, it may not be Wolf’s story at all. Framing the novel are a series of stark vignettes set in the mind of a man named Shomer. Once a writer of Yiddish pulp fiction, Shomer is now a prisoner at Auschwitz. Stripped of his freedom, friends, family, his health and his dignity, Shomer takes refuge in the one thing the Nazis can’t take from him: his storytelling. To what degree Wolf is a figment of Shomer’s imagination and his only chance at revenge and redemption is a question left to the reader to decide.

A Man Lies Dreaming is not an easy book, nor should it be. It forces its readers to revisit and reconsider some of the most horrific moments of the last century, and demands its audience spend time inside the mind of one of the most reviled men in history. It’s a bleak, disruptive masterpiece about power, ambition, violence and death. But, like all Tidhar’s work, it is not without hope. If there is one thing that unifies Tidhar’s novels, it’s an unfailing faith in the power of love – the love of friends, of lovers, and of parents. We are such terribly delicate, fallible creatures, Tidhar suggests, but as long as we can love each other, we just might make it through to the end.