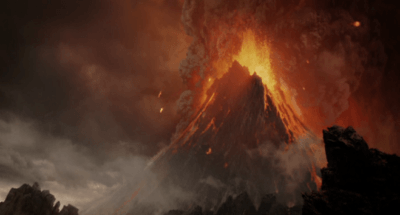 One of the main reasons we all love fantasy novels is the ability of our favourite authors to conjure up a new and vibrant world for us to explore. We often wish we could visit these places from our favourite books, I mean, who hasn’t wished they could explore the expansive magical grounds of Hogwarts or sit back and smoke some pipe-weed in the Shire with our hairy-footed friends?

However, fantasy can also have the opposite effect, so I have decided to compile a list of some of the more twisted and nightmarish landscapes that our beloved fantasy writing community has thrown up in the form of the places you would least like to go on your summer holidays in fantasy.

A soulless, colourless, inescapable prison filled with beings that suck every ounce of happiness from your life – and no I’m not talking about the family trip to Butlins – Azkaban leaves a lot to be desired for the would-be holiday maker. Cosying up to murderers and Death Eaters alike in the claustrophobic surroundings of chains and darkness won’t appeal to the average person but hey, I’ve heard the sea views are to die for.

For thrill-seekers, Lykos might seem like the perfect destination, subterranean adventures on the red planet sounds like fun, right? Wrong! Poisonous pitvipers, deadly noxious gases and an ever-watching, violent totalitarian regime are enough to ruin anyone’s day, however at least you wouldn’t need to bring your factor 50, the only burns you’ll be getting are in the scorching helium-3 mine.

Mount Doom – The Lord of the Rings, J.R.R. Tolkien

The clues in the name for this one really. Unless your idea of fun consists of excruciating mountainous treks, avoiding molten lava eruptions and skirmishing with bloodthirsty orcs, Mount Doom probably isn’t the place for you. Under the close watch of Sauron’s ever-searching eye this is one resort you wouldn’t dare to steal a towel from (we’ve all done it). Maybe a rebranding is needed to get the Elves, Dwarves, hobbits and other beings of Middle-Earth flooding through the Black Gates on their holidays, but Mount Smiles doesn’t quite have the same ring to it…

If the other entries on this list are bad, the Metro is horrific, a lack of the most basic necessities, constant disappearances, aggressively idolatrous Nazi and Communist groups and bitter infighting between stations makes this underground system a claustrophobic nightmare. Fancy taking a walk on the surface to forget about the situation below? Only if you enjoy deadly radiation and mutants eating your face. A hellish landscape and a constant uncertainty as to whether anything remains of humanity elsewhere contribute to what must be one of the worst potential holiday destinations out there, and we haven’t even talked about the Dark Ones… I don’t know about you but I’ll stick with Ayia Napa for now

The Wall – A Song of Ice and Fire, George R.R. Martin

What doesn’t sound appealing about a 700 foot wall spanning 300 miles at the edge of the known world with political instability and civil war on the one side and swathes of wildlings, White Walkers and other deadly creatures on the other? Sharing your accommodation with thieves, murderers and other criminals, it’s hard to see what could go wrong here, although you will often be reminded of the last thing you want to hear on your summer vacations… that winter is coming.

What seems at first glance to be a picturesque, seaside Town becomes – on further inspection – a hell on earth. Wherever you go on holiday, culture clashes are sure to occur, like that time you mistakenly ordered snails in France while trying to rent a car, but when the locals have been subject to dark magic making them soulless husks of their former selves, whose only motivation is greed and simplistic pleasure, the subtleties of respectful tourism become much more difficult. Want to borrow some bread to feed the kids? That’s a stab in the eye; want to pay for some souvenirs? That’s a kick in the shin and your money gone; want to simply ask for directions to leave? That’s a… well, you get the picture.

Antonio is on a work placement at Hodder & Stoughton and experiencing his first taste of the publishing world. He enjoys classical science-fiction and fantasy but also dabbles in the odd historical text. Give him anything with a dragon, a spaceship, a map or preferably all three and he’ll be happy.