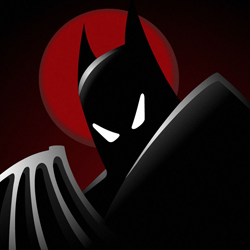 Posted on January 13, 2015 in Television with tags Batman, Misfits

Agent Carter hasn’t premiered over here yet, but we’re all very excited about it – not least because Hayley Atwell’s very human Peggy Carter was such a great foil for Chris Evans’ ridiculously superheroic (and regular ol’ heroic-heroic) Captain America in Captain America: The First Avenger. (Though that’s part of it!) We’re also excited about a female-led superhero (ish) show, and stylish, period-set one at that. Win/win!

While we wait, however, here are a few superhero shows to introduce yourself to (or revisit, if you’re already a fan).

Debuting in 1991, Batman TAS was unlike any other superhero cartoon – or, indeed, any cartoon – then on tv. It was dark, it was gritty, and it was incredibly stylish, featuring compelling writing and gorgeous animation. It introduced fan-favourite Harley Quinn to the Batman universe and featured wonderful, thoughtful takes on classic Batman villains from Catwoman to Mr Freeze. Also noteworthy: Mark Hamill (yes, Luke Skywalker) and his demented turn as the Joker.

Classic episodes: ‘Heart of Ice’: the Emmy Award-winning episode about the tragic Mr Freeze. ‘Beware the Gray Ghost’: former Batman actor Adam West cameos as a washed-up action star who gets caught up in a dangerous adventure.

Smallville has such an appealing premise: it’s about teenaged Superman, coming to terms both with being a man and a superman. Superman frenemy Lex Luthor and supersqueeze Lana Lang are there (my, the Superman team really liked alliteration) alongside Clark’s parents, friends and the many, many villains of the week that seem drawn to his rural farming town in Kansas. Smallville ran for ten year, seeing Clark through high school, college and into his early years at the Daily Planet, where he’d meet a young Lois Lane… (see what I mean about the alliteration?)

Classic episodes: Start wit the pilot. And then – oh, heck,  check out Lois & Clark while you’re at it.

The show took a precipitous decline after its first season and was quietly cancelled after five seasons, prompting many to wonder that it was still on to be cancelled. But the importance of that first season is undeniable; two years before the Marvel Cinematic Universe began its full-frontal assault on pop culture, Heroes made superhero narratives a water-cooler talking point.

Classic episodes: honestly, you should just watch the whole first series. But stop there.

Sweeter, nerdier and much more down to earth than Heroes, Chuck follows the adventures of hapless tech-nerd Chuck Bartowski, the accidental recipient of a mental upgrade that installs every secret of the FBI, CIA and NSA in his head. Over the years Chuck becomes more able and confident in his abilities, but never loses his innate goodness (or nerdiness). Come for the action, stay for the ‘sandworm from Dune’ costumes and Zork jokes.

Get all that goodness and heroism out of your system with Misfits, the superheroes-with-ASBOs series that ran for five brilliant years. What would happen if a bunch of difficult teenagers wound up with incredible powers? Would they be strong and heroic like Clark Kent in Smallville, or the cheerleader in Heroes? Or would they abuse their powers for their own selfish, self-absorbed ends? The answer is obviously ‘they’d go nuts and cause a lot of trouble, with hilarious results’.

Classic episodes: all of ‘em.