I don’t know about you, but my least favourite thing about Black Mirror is that there aren’t more episodes. The show is utterly brilliant, mind-blowingly fascinating, and completely unique (if sometimes also bleak and emotionally draining).

There’s nothing I can do about the fact that you want more Black Mirror (I’m sorry, I only get a limited amount of uses from my time machine before I rip a hole in the universe and there are a lot of movies I simply can’t wait see in the next few years). What I can do however is recommend 5 books that are perfect to tide you over until the release date of the next season.

1. Stories of Your Life and Others by Ted Chaing 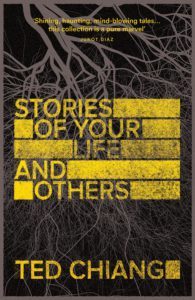 From a soaring Babylonian tower that connects a flat Earth with the firmament above, to a world where angelic visitations are a wondrous and terrifying part of everyday life; from a neural modification that eliminates the appeal of physical beauty, to an alien language that challenges our very perception of time and reality. . . Chiang’s rigorously imagined fantasia invites us to question our understanding of the universe and our place in it.

One of the short stories, ‘Story of Your Life’, was made into the award-winning (and excellent) movie Arrival. It was also my favourite of the collection before it was adapted so I get to feel slightly smug.

As a short story collection you get to experience a whole bunch of stories and ideas rather than just one – just like in a season of Black Mirror. Plus, reading just one or two is perfect for when you don’t have enough time to dedicate to a whole novel.

The stories in the collection have won 7 awards and China Mieville wrote a glowing review of the collection in the Guardian. If that combined isn’t a great recommendation I don’t know what is. 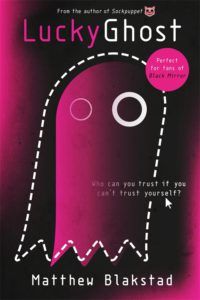 Early one morning, blogger Alex Kubelick walks up to a total stranger and slaps him across the face. Hard.

They’ve both just earned Emoticoin, in a new, all-consuming game that trades real-life emotions for digital currency. Emoticoin is changing the face of the economy – but someone or something is controlling it for their own, dangerous ends.

As Alex picks apart the tangled threads that hold the virtual game together she finds herself on the run from very real enemies. It seems only one person has the answers she seeks. Someone who hides behind the name ‘Lucky Ghost’.

But Lucky Ghost will only talk to a young hacker called Thimblerig – the online troll who’s been harassing Alex for months.

Will Lucky Ghost lead Alex and Thimblerig to the answers they seek – or to their deaths? 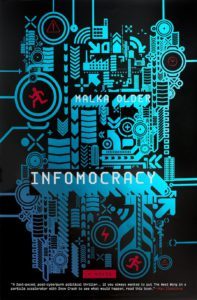 It’s been twenty years and two election cycles since Information, a powerful search engine monopoly, pioneered the switch from warring nation-states to global micro-democracy. The corporate coalition party Heritage has won the last two elections. With another election on the horizon, the Supermajority is in tight contention, and everything’s on the line.

With power comes corruption. For Ken, this is his chance to do right by the idealistic Policy1st party and get a steady job in the big leagues. For Domaine, the election represents another staging ground in his ongoing struggle against the pax democratica. For Mishima, a dangerous Information operative, the whole situation is a puzzle: how do you keep the wheels running on the biggest political experiment of all time, when so many have so much to gain?

4. The Dark Net by Benjamin Percy 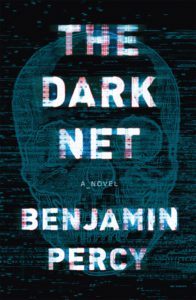 The dark net is an online shadowland for criminals to operate anonymously, but when a demonic force begins to hack the minds of its users there is nowhere left to hide.

Twelve-year-old Hannah has been fitted with a high-tech prosthetic that restores her sight, but can’t understand why she can now see shadows surrounding certain people.

Lela, an emotionally shut-off, technophobic journalist stumbles onto a story nobody wants her to uncover. A story someone will kill to keep hidden.

A former evangelist, Mike, suffers demons – figurative and literal – and keeps an arsenal of weapons stored in the basement of the homeless shelter he runs.

And Derek, is a hacker who believes himself a soldier, part of a cyber army dedicated to changing the world for the better.

With the virus spreading throughout the net and an ancient evil threatening to break lose on the real world, it falls to these strangers to stop the rising darkness.

5. Ready Player One by Ernest Cline 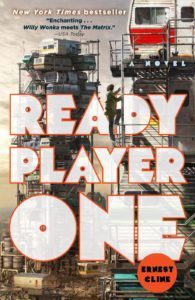 It’s the year 2044, and the real world has become an ugly place. We’re out of oil. We’ve wrecked the climate. Famine, poverty, and disease are widespread.

Like most of humanity, Wade Watts escapes this depressing reality by spending his waking hours jacked into the OASIS, a sprawling virtual utopia where you can be anything you want to be, where you can live and play and fall in love on any of ten thousand planets. And like most of humanity, Wade is obsessed by the ultimate lottery ticket that lies concealed within this alternate reality: OASIS founder James Halliday, who dies with no heir, has promised that control of the OASIS – and his massive fortune – will go to the person who can solve the riddles he has left scattered throughout his creation.

For years, millions have struggled fruitlessly to attain this prize, knowing only that the riddles are based in the culture of the late twentieth century. And then Wade stumbles onto the key to the first puzzle.

Suddenly, he finds himself pitted against thousands of competitors in a desperate race to claim the ultimate prize, a chase that soon takes on terrifying real-world dimensions – and that will leave both Wade and his world profoundly changed.