Posted on December 13, 2013 in Friday Favourites with tags Westerns

From winter wonders to the wild wild west! Inspired by Stark Holborn’s Nunslinger (which is now FREE to pre-order!) we’re picking our favourite westerns in this week’s Friday Favourites! 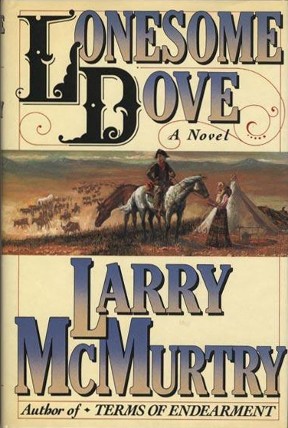 I arrived at Arrow Books in 1990 as a paperback editor. In those days we were put in charge of about one hundred titles a year, covering all the genres, including Fantasy and Westerns. So I ended up looking after Dave Gemmell and Larry McMurtry. Dave, a passionate fan of the Western genre, was pleased to be flying in the same formation as McMurtry and was eager to start my Western education. He lent me the videos of the TV mini-series Lonesome Dove and pretty much forced me at gun-point to read the book. I was so glad he did. If you love epic, if you love quest and want to watch and read something that has the oceanic ebb and flow of the greatest fantasy, then Lonesome Dove on-screen and between-covers is for you.

It’s 1876. Gus McCrae, a warm, good-natured womaniser, and Woodrow F. Call, a stern, taciturn workaholic often compared to Melville’s Captain Ahab in his refusal to give up whatever the odds, are former Texas Rangers eking out their autumn years in the dusty, eponymous town of the title. Their sleepy existence is disturbed by the arrival of a friend, Jake Spoon, on the run from the law. Spoon  tells them of the ranching opportunities in the green state of Montana. The challenge is irresistible. A scheme comes together to drive a vast herd of cattle northwards and set up a ranch in this promised land. Gus and Woodrow should take the hint that the plan is plain crazy when its begetter, Spoon, drops out, preferring to stay in the dustbowl town instead. But the two friends are set. Call is driven by the messianic idea of the quest. Gus? Well, there’s a woman up in Nebraska he wants to catch up with before it’s too late.

Compelled by these different motivations, the journey begins. Triumph and tragedy, endurance and failure, love and hatred follow. The dynamic of the two major protagonists on the screen played by  Robert Duvall as the initially carefree Gus and Tommy Lee Jones as the crusty and driven Call is scintillating and make this must-see TV. McMurtry’s brilliance with character and setting and plot make the book a classic, a totally immersive read. 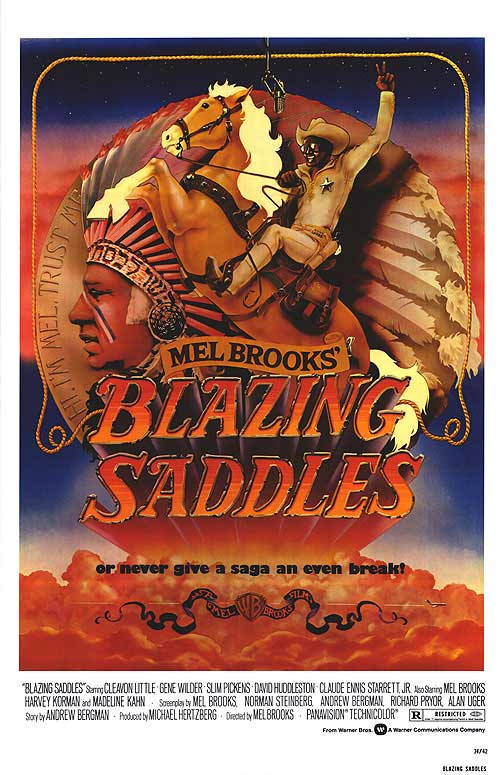 It’s a toss-up as to what my favourite Western film is; depending on my mood, it’s either The Man who Shot Liberty Valence (1962) or Blazing Saddles (1974). As it’s Friday, and as I’ve seen Blazing Saddles most recently, it’ll be today’s choice. Though I encourage everyone to watch Liberty Valence, which stars John Wayne, Lee Marvin and Jimmy Stewart (triple whammy!) in an extremely traditional film about making the myth of the wild west (there are shades of The Dark Knight’s famous ‘he’s the hero Gotham deserves, not the one it needs’ speech in Liberty Valence’s conclusion). But it features three iconic actors in three iconic roles, playing three iconic Western types. And there’s a very large steak. Check it out.

Anyway! My actual choice is Mel Brooks’ 1974 black comedy classic Blazing Saddles, a film that almost certainly could not be made today. In addition to being a shockingly irreverent send-up of racial politics in modern America, it also features a superb (albeit divisive) climax that more or less literally breaks the fourth wall in a bravura sequence that is, frankly, mindblowing in its metatextual depth.

The year is 1874. Cleavon Little stars as Bart, a black railroad worker slated for execution who is, instead, made sheriff of a small town in the villain’s unscrupulous attempt to drive the (white) townsfolk off their land. Bart and his laconic sidekick, Gene Wilder’s alcoholic has-been gunslinger Jim, overcome the town’s deeply ingrained racism and save the day – primarily by virtue of the fact that they’re the only two smart characters in the entire film. Which is sort of what the film’s about, you see?  (Sample dialogue: Bart gets himself out of trouble and then congratulates himself with ‘Oh, baby – you are so talented.’ Then he looks straight at the camera and continues, ‘and they are so dumb.’) By the movie’s end, the Warner Brothers’ backlot is in ruins (again: literally) and Bart and Jim are riding off into the sunset… in a limo. The language of the film is shocking (do not watch it with your kids) but the satire has retained its bite. And I can probably quote the entire thing from memory. 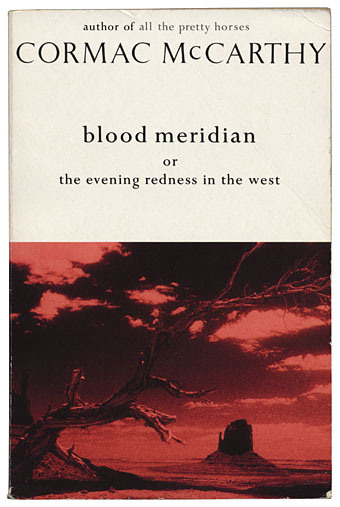 Blood Meridian is set in the 1840s and 50s, decades in which some of the most influential writing about the American landscape was being published by people such as Emerson and Thoreau. Much of this writing talks about a return to nature and celebrate the open wilderness of America as a new Eden in which humanity can be reborn.  It seems to me that Blood Meridian is the dark side of this dream.

People may be reborn in Blood Meridian (in a truly bizarre scene at the end the Judge spins around ‘like an enormous infant’), but this re-birth strips them of all human niceties and moral considerations (killing is bad, torture is bad, scalping is bad etc.). There is no law or order in the wilderness of Blood Meridian, only a blank canvas spattered with blood. The lawlessness of the West breeds mindless violence, and Blood Meridian  racks up a pretty formidable body count.

It’s an awesome testing of certain foundational ideas about the American West, and one of the bleakest books around.