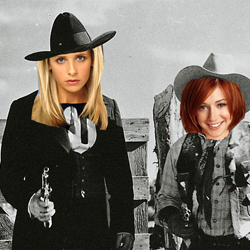 To celebrate the arrival of Stark Holborn’s Nunslinger in paperback we’re fancasting some Westerns!

A few folks have asked me about this over the last year, and I always get as stuck as a june bug in a jar of pokeberry jam. I’m cheating somewhat and doing some true fantasy casting here, with actors ranging from 1950s to now…

But here we go, I’ll do my darndest:

Directed by: the Coen Brothers (come on, I had to really)

Music by: Ennio Morricone with help from Utah Phillips and Anais Mitchell

If time weren’t an issue I’d go for Grace Kelly straight up. It’s actually her face that Phil Harris (the illustrator of Nunslinger’s cover) and I used for reference. If I had to choose a livin’, breathin’ actor I could maybe be persuaded by Jennifer Lawrence.

Colm Puttick / Bill Bird: Jason Robard (who played Cheyenne in Once Upon a Time in the West) or Norman Reedus. Take your pick!

Marshal Benjamin Reasoner: I loved Seth Gilliam’s performance as Carver in The Wire, particularly his character progression over the five seasons – reckon his measured quality would make him a great Reasoner.

Owl: I’d love to see Julia Jones wielding a pair of knives as Owl. She was in Twilight, but I can forgive her for that.

Bonus part: If Eli Wallach (AKA Tuco the bandit) was still alive. I’d snap him up in a second. Hell, I’d even write a new part for him.

And of course, I’m expecting the Hodderscape team to take up cameos as varmints in one of the (many) saloon brawls…

A remake of The Man Who Shot Liberty Valance

I’d love, love, love to see a remake of one of my favourite westerns, 1962’s The Man Who Shot Liberty Valence. In a weird way, that is, because the original is pretty close to perfect – it starts John Wayne, Lee Marvin and Jimmy Stewart in iconic roles as three men whose lives intersect at the end of the end of the period of historical western expansion and the beginning of the myth of the Old West, a time when men were men (and ate steaks too big to fit on their plates). Despite being very much a product of its time (and featuring a lot of thematic, knee-jerk reactionism to the rise of books an’ learnin’ and law over gut instinct and vigilante justice), Liberty Valence remains a spectacular examination of history, mythology, and the stories we tell about our own lives. SO. Let’s get to the fancasting.

Tom Doniphon – Tom is a good man; rough around the edges, but hard-working and very, very manly. Played by the legendary 6’3” Wayne in the original, Doniphon embodies the rough-and-ready spirit of the old west, a hard-drinkin’, drawlin’ farmer with a heart of gold. Wayne doesn’t really have a modern equivalent, but I’d love to see Idris Elba tackle this role; he’s a huge physical presence and he can do tortured intensity with the best of ‘em. Also: hot. So hot.

Ransom Stoddard – Ransom is the citified young whippersnapper lawyer who comes to town full of innocence and idealism, only to have his humanity cut away by the villainous Liberty Valence. Played with all the humour and sensitive restraint at his command by Jimmy Stewart in the original, my remake would have to feature Tumblrgod Tom Hiddleston. He doesn’t get the chance to play good guys that much these days, and I think he’d bring real warmth to the role of idealistic young whippersnapper.

Liberty Valence – it’d have to be Walton Goggins. You know him best as Boyd Crowder from Justified, where he plays one of tv’s best, most nuanced morally-ambiguous villain-ish baddies – so imagine him as the truly chaotic evil Liberty Valence. Truly, there’s no other actor who could step into Lee Marvin’s shoes.

Hallie Stoddard – the woman at the centre of the love triangle that informs Liberty Valence’s major subplot doesn’t have a lot to do in the original. I’d like to beef up her role and drop the absolutely wonderful Julianna Margulies into it. We know from ER and The Good Wife (and, uh, Snakes on a Plane) that she’s equally good at no-nonsense prairie-living and earnest protestations, both of which she’d need in spades to have to choose between Idris Elba and Tom Hiddleston.

I’d like to round out the cast with Nick Offerman, Margo Martindale, Dean Winters and Alec Baldwin, because they’d be awesome as whatever. My remake will be directed by the Coen Brothers, with cinematography by Roger Deakins (Skyfall, Fargo) and scored by Carter Burwell (True Grit, Fargo).

Since I just happened to be reading an article about the West End revival of Bugsy Malone the other day, I have decided to cast my Western using child actors – hey, if it works for 1920’s mobsters it can work for the Wild West.

Chloe Moretz (a la Kick Ass) as their, well, kick-ass nemesis. Elle Fanning (a few years younger than she is now) as Macauley’s love interest, rescued from the claws of death just in the nick of time.

And maybe Rupert Grint (of a decade or so ago) as the sheriff.

So, I’m pretty apathetic about action movies until they involve women being completely bad ass, flipping over things and stabbing them and whatnot. I have basically just described Buffy, and I feel that though the world may not need a Buffy movie (not the One That Must Not Be named) but it may need a Western version of Buffy. Think Near Dark, but with more puns and flipping.

Buffy ‘the Slayer’ Summers is the new kid in town. She’s got a lot of demons in her past, but she didn’t think they’d follow her here. On her first day in town she gets into a bar fight, but she’s rescued by a mysterious figure known only as The Angel.

Alongside Xander ‘One Eye’ Harris and Willow ‘The Witch’ Rosenberg, she fights the forces of darkness comprised of (but not limited to): a Sheriff who turns into a giant rattlesnake, a demon who flays cattle (and people too), and an oil tycoon known as Glorious Red.

Buffy also gets a lasso!