Posted on July 28, 2014 in Books, Film, Television with tags Events and exhibitions

The world’s most famous comic con happened this weekend… and we (sadly) weren’t there to see it. But here’s a roundup of the awesome stuff we’ve seen and heard about it!

Someway, somehow, Ariel became the mascot for all of us stuck at home when the rest of the geeky world was off having fun.

SDCC previewed a lot of stuff, including the new Batman cape and cowel and a lot of teaser posters (for Avengers: Age of Ultron, Jurassic World, Mad Max Road Fury, Horns, Mockingjay, and many more). And some trailers.

Everyone from The Guardian to Business Insider posted photos of the SDCC cosplay. 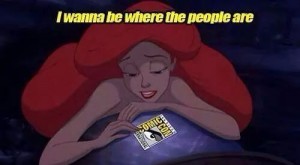 Tumblr was flooded with new gifs. (Everyone really loves Chrises Evans and Hemsworth, and TeenWolf, and Natalie Dormer. And Orlando Jones. And, uh, everyone else. Everyone loves everyone!)

American Ninja Warrior Kcy Catanzaro made short work of the Assassin’s Creed obstacle course, provoking a lot of comments about the amount of work it took to photograph her mid-course.

Hey, maybe we’ll see you there next year!