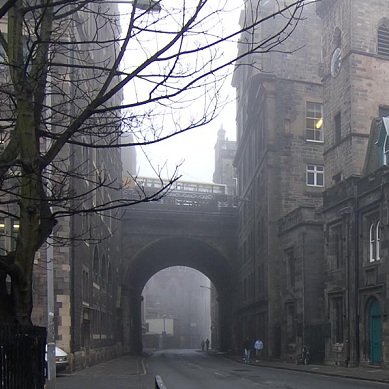 Apologies for the lateness of today’s article, I’ve just this moment stepped off of a train from Edinburgh, where I’ve just spent the most fantastic weekend.

Now, I’ve been regularly visiting the city for the past year or so, and I have completely fallen in love with the place… But not in the way you might expect. The literary history of Edinburgh is well documented, from Ian Rankin to J K Rowling, but I’m talking about its dark side.

However, Edinburgh is somewhat of a haven for a horror fan like myself. The narrow, winding alleyways, cobbled streets and dark grey brick never fail to make me think of every ghost story I’ve ever heard. Not that Edinburgh is short of its own stories; its Old Town is said to be one of the most haunted areas in the British Isles.

Mary King’s Close is a particular favourite with tourists. Hidden underneath the Old Town part of the city, urban legends state that it is haunted by the spirits of plague victims who were quarantined and left to die there… and that their bodies were used to build the walls.

The Edinburgh Vaults have also played host to a huge number of paranormal investigations, with its most notable ghost being a man with no face, while stories of trapped spirits can be found everywhere you go.

However, my particular favourite is the Banshee Labyrinth. It’s called Scotland’s Most Haunted Nightclub, and actually used to be part of the city’s underground vaults. Nowadays, it’s home to a free cinema and events ranging from comedy nights to heavy metal gigs, but the maze-like interior and ancient metal cages and stocks gives the place an air of creepiness even today.

To really make the most of Edinburgh’s hauntings, I highly recommend taking one of the many walking tours that operate across the city. Even if you don’t believe in ghosts or the supernatural, the atmosphere and story telling makes them worthwhile.

Are any of you from Edinburgh and love its spooky side? Or do you live in a city with its own catalogue of hauntings? Let me know in the comments below, especially if you have a story to share!