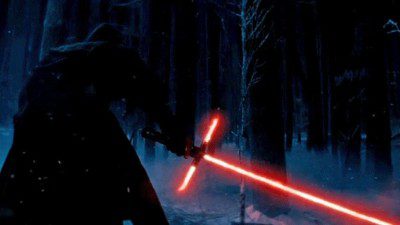 New Star Wars trailer! My head says “it’s only a trailer”, but the rest of me is running around making light sabre noises . Zzzziwwwww! Whooosh!

Let’s just take this calmly, one shot at a time, shall we?

Shot #01
It takes 10 seconds into the trailer to fade up. 10 SECONDS. You could have fitted in an extra shot of things exploding there, guys.

Shot #02
Sand! The chances are good that we’re back on Tattooine, connecting it directly to the locations of the original films.

“There has been an awakening” – Who’s speaking? It sounds a bit like Smaug, or at least, Benedict Cumberbatch? He worked with J J Abrams on Star Trek Into Darkness and is known to have visited the Star Wars set. Given that he’s Hollywood’s new go-to British villain, could he be playing a new Sith baddie?

Shot #03
Here’s John Boyega, who appears to be pretty panicked on finding himself out in the desert. He was also in Attack the Block, but is far from an established name. It’s great to be getting new talent – can you imagine taking on a gig like this?

Shot #04
Here’s a trick R2D2 didn’t have, even in the prequels. Is this going to be a new comedy droid?

Shot #05
Some subtly redesigned Stormtroopers – is John Boyega one of them, and gets separated from his troop? What’s their mission?

Shot #06
Cool shot this. Feels really solid – looks like the emphasis on practical sets over CGI is going to pay off nicely. Though no doubt the old favourites will be back.

Shot #07
Here’s Daisy Ridley, taking on a Luke Skywalker-like role, by the looks of things. She already looks pretty badass.

Shot #10
This is a cool shot. Is this the same snowy planet as in later shots?

Shot #11
“The dark side…”
Oooh, this looks very evil! The Sith have been taking lessons in sinister from the Klu Klux Klan with that flaming-cross-like lightsabre. Who is it? It’s hard to tell who the actor is. I’m guessing a she – possibly Gwendoline Christie from Game of Thrones, who’s also no stranger to prosthetics, having played Lexi in BBC’s Aliens vs Wizards. Let us know your theories below!

Shot #13
Well, that’s woken me up on a quiet Friday afternoon.

Notable by their absence… Luke, Han and Leia, Chewbacca, C-3PO and R2-D2. This trailer is looking forward, not back, which is just as it should be.

It’s hard to judge how good a film will be from just a teaser trailer. The trailers for The Phantom Menace looked cool back in the day. The fact that it’s Star Wars guarantees a hyperbolic level of excitement. But as a tease for the new characters and a return to that galaxy far, far away, it seems pretty well judged. Next December can’t come soon enough!

What did you think of the Star Wars trailer? Are there clues that we’ve missed? Let us know below or on Twitter!