This week Pickwick sent you on an intrepid expedition to the Zodiac Station research base for the chance to win a deadly Arctic predator. While digging around the base you may have learned a little about the science behind Tom Harper’s new thriller Zodiac Station. While you’ve been digging around for answers the Hodderscape team have not sat back idly and this week we’ve been doing a little research of our own . . . into our favourite scientists! 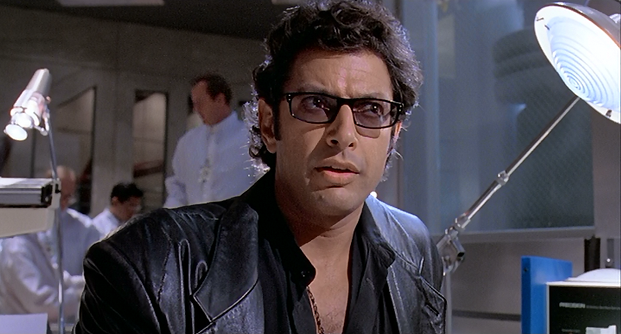 Confession time: my dream, from before I could walk until I was well into my teens, was to become a palaeontologist. Because, obviously, devoting your every waking hour to the study of dinosaurs is very best thing ever. That’s it. That’s baseline truth.

I’ve met a few  palaeontologists over the years, and they all seem pretty comfortable with that fact. So it may come as no surprise that my favourite scientist – and there are so many I love – comes from Michael Crichton’s man vs. dinosaur thriller Jurassic Park. But my favourite scientist from Jurassic Park isn’t, as you might guess, Dr Alan Grant (the palaeontologist) or Dr Ellie Sattler (the palaeobotonist) – nope. My heart then and now belongs to Ian Malcolm, the sarcastic chaos theorist who predicts that the whole ‘let’s bring back the dinosaurs’ lark might not be the best idea, and gets pretty badly chomped on during a t. rex rampage.

So, then. Why, of all of them, have I chosen Malcolm? It all comes down to the snark. I haven’t got quotes from the novel to hand, but IMDB is going to help me make my case:

John Hammond: All major theme parks have delays. When they opened Disneyland in 1956, nothing worked!
Dr. Ian Malcolm: Yeah, but, John, if The Pirates of the Caribbean breaks down, the pirates don’t eat the tourists.

Dr. Ellie Sattler: [after finding Malcolm with a broken leg] Should we chance moving him?
Dr. Ian Malcolm: [the Tyrannosaur roars nearby] Please, chance it.

What can I say? I like a smart guy with a sense of humour. And dinosaurs.

Peter: ‘Are you OK?’
Walter: ‘Yes. Although when I mentioned that the poison would kill me within the hour,
did either of you happen to notice the time?’

I LOVE DR BISHOP! I love Fringe in general, but Walter, for me, is the beating heart of the show – he brings the science, he brings the humour, and he brings the pathos. Here are five reasons of the many reasons why he’s the best:

‘Well, we’re all victims of our own gene pool. Someone must have peed in yours.’ 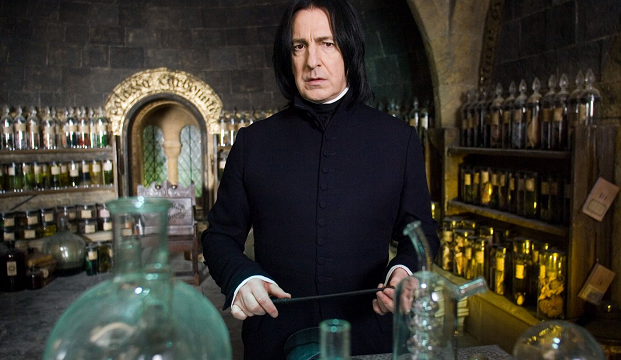 In the Hogwarts curriculum, Potions is to Chemistry as History of Magic is to History, and Snape is Potions Master ergo he is a scientist. My reasoning may be tenuous, but my evidence is strong: if it looks like a duck, swims like a duck and uses lots of glass apparatus then it’s probably a duck with a degree in Chemistry.

So despite protests from the rest of the Hodderscape team, I am choosing Snape as my favourite scientist. Without giving away a spoiler the size of a Ukrainian Ironbelly, Snape is an emotionally complex character with many hidden depths. But, as well as all that fluffy stuff, he is Master not just of Potions (and, um, ‘science’), but of the sarcastic put-down –  enough to cement his status as a national treasure.

Wayne Szalinski from Honey I Shrunk the Kids

My favourite scientist is the loveable and clumsy Wayne Szalinski from the 1989 film Honey I Shrunk the Kids and then the 1992 Honey I Blew Up the Kid.   Both films were favourites of mine when I was younger and writing this has actually made me want to rewatch both this weekend.   Wayne is such a great character, he’s slightly nutty and silly but then so obviously a genius if he can manage to build a machine that can both shrink and the enlarge thing… it’s just unfortunate (or brilliant) that his subjects seem to always be his children!   I particularly love the idea of a gigantic baby as was presented in Honey I Blew up the Kid.  I loved watching giant baby Adam stomping towards Las Vegas in a Godzilla-esque manner!   Both films are just really good fun and I’m looking forward to enjoying them all over again…

Now, you have to admit that when you first watched Jurassic Park, you thought that Ian Malcolm was great and that Alan Grant was so ANNOYING. Right? Just me…? Ah, well.

Ian Malcolm is a mathematician, which according to Wikipedia is ‘The discipline of applied mathematics concerns itself with mathematical methods that are typically used in science, engineering, business, and industry; thus, “applied mathematics” is a mathematical science with specialized knowledge’. So he is a scientist! He is a great character and is played by the Jeff Goldblum, you can’t really go wrong. With all his exaggerated speech patterns and extensive use of hand gestures, Ian Malcolm manages to pull off being arrogant and wearing leather trousers. Okay, maybe just being arrogant.

One of my favourite scenes was when the scientists are eating with Hammond just before the tour, this scene is simply a bunch of people just talking in a room – which is honestly a difficult thing to pull off in a film. Especially in the ‘let’s blow things up’ movie culture we live in today. Goldblum captivates as Ian, ripping into Hammond over the ethics of the park – morals and leather trousers? Calm down, ladies.