Announcing a new YA series from Sandhya Menon 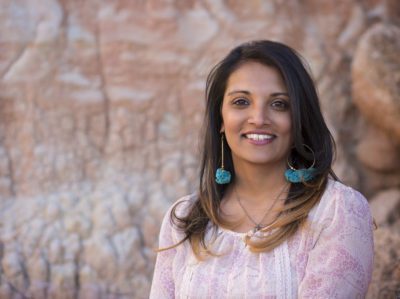 We are thrilled to announce a brand-new contemporary young adult series by Sandhya Menon, the New York Times bestselling author of When Dimple Met Rishi. In a universe described as ‘Gossip Girl with a dash of magic’ the St Rosetta’s Academy series is set at an elite international boarding school, following three sets of teens as they navigate first love, friendship, and identity.

The first book, Of Curses and Kisses, will publish on 4th February 2020, following Princess Jaya Rao, who finds out she’ll be attending the same elite boarding school as Grey Emerson, a member of the rival royal family behind a humiliating scandal involving her little sister. Jaya has a plan for her revenge on the young nobleman in order to even the score between their families: make him fall in love with her and then break his heart the way his family has broken hers. But when Jaya and Grey begin to actually fall for each other, she starts to realise there’s maybe more to him than his name and his family imply. . . Can the pair find their happy ever after despite their differences?

Carrying all the trademarks of Sandhya’s other beloved works, including brilliant writing and diverse characters, we can’t wait to enter St Rosetta’s Academy!

Of Curses and Kisses will be released in February 2020 and is available to pre-order now from Amazon, Waterstones and other good bookstores.