How to save Star Wars

No amount of prequel-induced cynicism can stop our hearts soaring like the Millennium Falcon when we hear there’s a new Star Wars movie approaching.

Make no mistake, we’re all going to see it. But then, we went to the prequels, and they were mostly awful. Those films showed us that there are many ways the next-gen Star Wars can go wrong. But we shouldn’t flirt with the Dark Side – let’s look at how they could go right.

It took The Phantom Menace just a line or two to dismantle our affection for the Force. It was all down to Midichlorians, apparently. Space algae.

I preferred it when it was just ‘magic’, thanks – something amazing, something ineffable.

This is when Star Wars took a step out of the ethereal, timeless realm of fantasy and into the charmless sphere of pseudo-scientific filibustering.

Make the Force magical again. Undermine those Midichlorians. Say something like: ‘Midichlorians are drawn to people strong with the Force – they don’t cause it.’

Failing that, I can recommend a good bleach.

Remember that bit in the Mos Eisley Cantina, when Sir Alec Guinness’ Obi-Wan filleted that uppity fellow with the bad skin and the boy who had a chin like a glans?

It was awesome because we barely saw him do it. Ditto distracting the stormtroopers on the Death Star, or that beloved trick of under-age drinkers the world over: ‘You don’t need to see his identification.’

It was subtle. You wondered what on Hoth was happening. From there, we were hooked. We didn’t need to see massive, vulgar displays of Force, like triple backflips or piles of robots casually thrown around like confetti. On a related note: 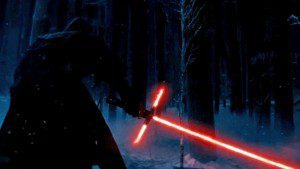 3. Use the lightsabres sparingly

I’m not totally convinced about the new baddie’s cruciform sword, but I’ll give it a go. Lightsabre duels are better if there’s drama involved, not just gymnastics. I’m not sure I want to see extended acrobatics sessions, spectacular though they are. And please, no more deflecting laser bolts willy-nilly. It’s boring and removes all sense of threat in dangerous situations.

Ditto duels: none of the brawls in any of the prequels, for all their athleticism, could hold a candle to Luke v Vader in Empire, or even Obi-Wan v Vader in A New Hope, 25-point turns and all.

There was dramatic tension in those clashes. They threw the kitchen sink at Obi-Wan v Anakin in Revenge of the Sith, but I was almost bored with its 40-blows-a-minute aesthetic. Make those fights mean something.

4. No silly cameos and re-treads, please

It seems like such empty fan service. Look – there’s Greedo! Yaay! Here’s someone saying ‘I have a bad feeling about this!’ There’s that wee robot Chewie growled at on the Death Star!

I was ready to bite the cinema seats when Chewie got his five-second cameo in Revenge of the Sith. If you’re going to bring back old characters – and we know they are – give them a bit of time and space to actually do things other than sell toys or tweak nostalgia.

Alas, J.J. Abrams has a prior record for this. He made a splendid job of those two Star Trek movies until he tried a cute repackaging of Wrath of Khan and failed miserably.

5. A New Hope? Let’s have a New Direction

The biggest flaw in those prequels is that we knew precisely how it was all going to end. Empire is built; Obi-Wan and Anakin have a brawl; Luke and Leia are born. The end.

This new set of movies has a great chance to build a new story, a new saga, something totally different. We know Luke, Han and Leia will be back, so stay within the Skywalker clan if you must, but let’s have new names and faces in there, and new scenarios. Take the narrative somewhere new. Surprise us. 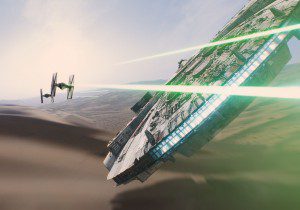 Wall-to-wall computer graphics aren’t as convincing as sets, make-up, hand-made creatures, ships, models, prosthetics and even stop-motion. All-digital sets and creatures are a big reason why the prequels were so flat and lifeless, for all their colour. There’s no weight to them.

There are signs that Abrams recognises this, if those spy shots of the full-size Falcon and X-Wing props are anything to go by. Speaking of which…

7. Join me in the Light Side

Take the Vow: ‘I will stay spoiler-free from now on until December 2015, when I’m sat in that cinema, watching the movie.’

How much better will it be if you have no expectations?

Because you will be there, of course. Credits will do fine.

2 comments on “How to save Star Wars”