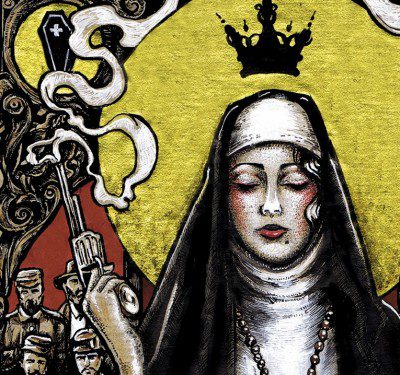 To honour the publication of Nunslinger, we choose our favourite gunslingers! And today, we have a special guest on Friday Favourites…

Yesterday we published Books 3-6 of Nunslinger, as well as the first omnibus collection Books 1-6! Sister Thomas Josephine is the eponymous Nunslinger, but few can wield a pistol with such Saintly devotion.  So this week we’ve picked out our favourite nuns and gunslingers, and we’re joined by Nunslinger author Stark Holborn! 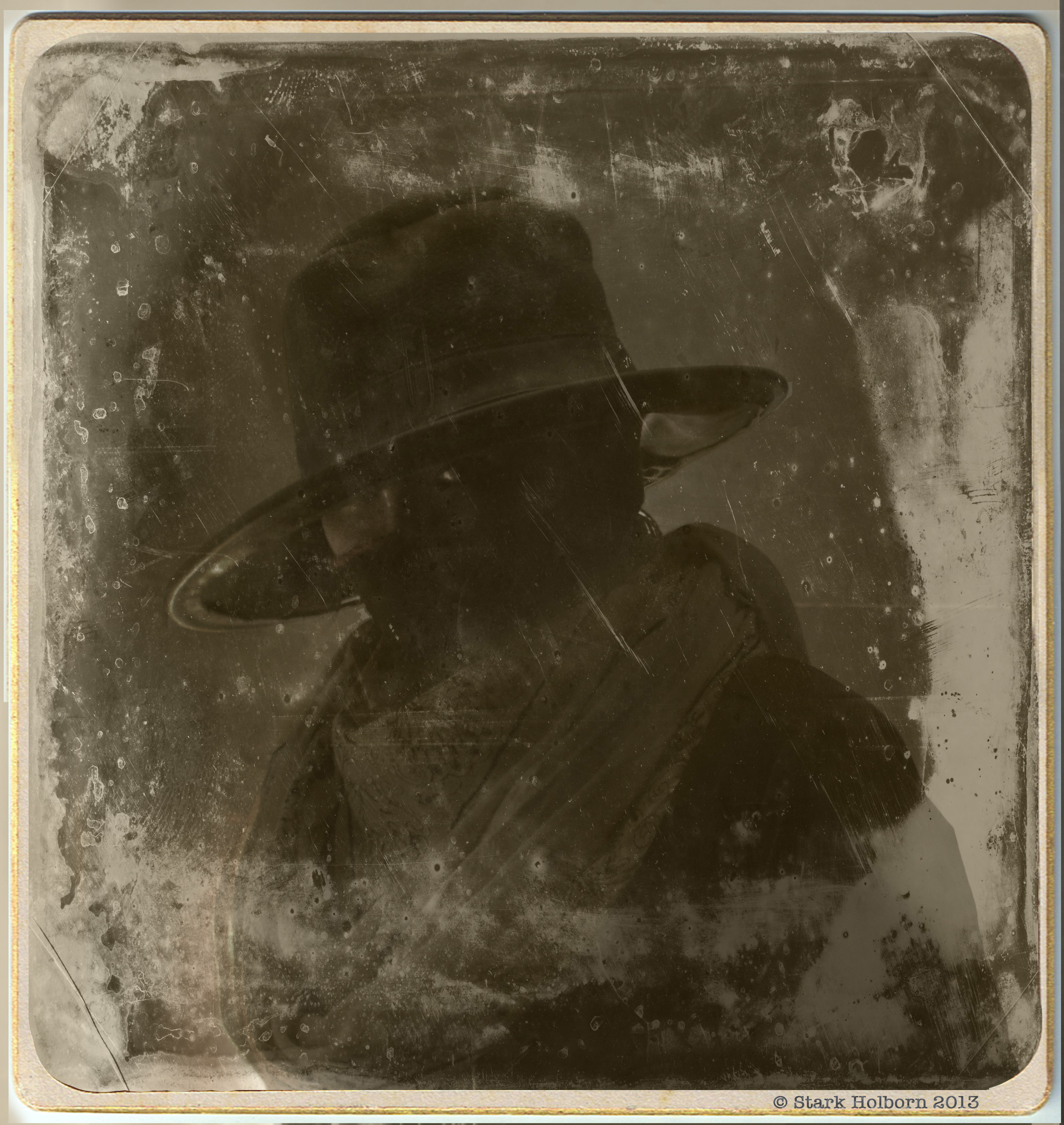 Gosh darn it’s hard to pick a favorite for this ‘un. Call me perverse, but I seem to be dithering somewhere between absolute, stone-cold classics and odd, genre-bending specimens. Perhaps that’s what’s so fascinating about Westerns themselves; eternal archetypes versus the ever-changing, vast and often surprising concept of the frontier.

Let’s start with classics: we got Charle’s Bronson’s Harmonica from Once Upon a time in the West, the ultimate in icy-eyed, dogged vengeance, with that eerie harmonica death-knell tune that sticks in your head and plays every time you’re eyeing someone in a fight for the last muffin.

I also got a secret love for Yul Brynner as the Gunslinger in Westworld simply ‘cos he steals the film and JUST WON’T DIE. 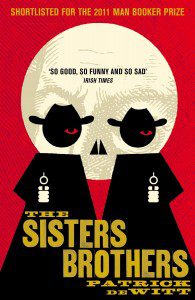 But the number one, overall, best damn gunfightin’ character award goes to Eli Sisters from Patrick de Witt’s The Sisters Brothers. He’s one of the most compelling, deftly written characters I’ve ever come across, and de Witt uses him to inject an uneasy sense of empathy and humanity onto the savagery of the West. Plus, look at that cover. Goddam genius.

The Man With No Name

An inspiration for Stephen King’s Roland Deschain in the Dark Tower series, Clint Eastwood’s Man with No Name presented to the world of the 1960s a new, thrilling and (tipping towards) amoral antidote to the traditional gunslinger hero of Hollywood legend. Imperturbable, unfazeable, cigar-chewing, poncho-wearing, blue-eyed, dead-eyed, deadly… Most important he didn’t say a lot.  King described Eastwood’s Man with No Name as ‘roughly eighteen tall, with each wiry jut of stubble looking roughly the size of a young redwood tree.’ Of his own character, Eastwood once said ‘I felt the less he said, the stronger he became and the more he grew in the imagination of the audience’. Brought up on Ford and Sturges movies, and idolising John Wayne, Sergio Leone’s The Dollar Trilogy blew my mind, particularly the epic and apocalyptic The God, The Bad and The Ugly . [Spoiler alert] TG, TB and TU wobbles for a long time on the moral perimeter and almost leaves us  teetering like Tuco perched on top of a cemetery cross with a noose round his neck. Despite all the bad stuff that goes down will Blondie do the right thing? The question is left unanswered to the last frame. Somehow The Man with No Name was the Everyman we all sought in the 60s and 70s… and decades later was resurrected so memorably in Clint’s  last Western as  the equally monosyllabic and granite-hewed William Munny in Unforgiven (1992). 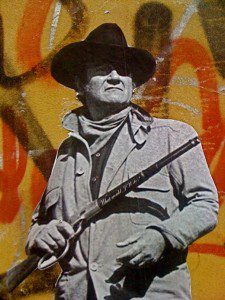 My dad loved westerns, and I grew up on a steady diet of Clint Eastwood and John Wayne, Louis L’amour and Jack Schaefer. (We knew Schaefer’s children casually, and dad prized a copy of Shane signed by the man himself, which they had given him.) The western remains one of my favourite genres; there’s something about the wide-open spaces, the dirt and the dust, the loneliness and the freedom that great westerns represent that has never lost its appeal for me.

But that said, I’m a huge fan of all the revisionist westerns cropping up these days – everything from the western-inflected fantasy of Joe Abercrombie to the modern-day cowboy shenanigans of Raylan Givens in Justified – and, of course, including our very own Sister Thomas Josephine, whose most recent adventures just published yesterday. Together, the new western cannon proves that there’s life in the old dog yet; we’re constantly reevaluating and reappropriating the ideas, the themes and the icons of the western, and we’re constantly striking gold. (See, for example, the picture I’ve included – I took it a couple of years ago on Brick Lane; it’s John Wayne as Rooster Cogburn, and the script on his rifle reads ‘what would John Wayne do?’)

All of which is a long-winded way of winding up to my choice for today: John Wayne. Not the person but the icon, the idea. John Wayne, the hulking, irascible, hard-drinkin’, slow-talkin’ cowboy first among cowboy equals. He’s not the trendiest answer but he’s who I think of when I think about westerns. His films haven’t all aged particularly well, but The Cowboys always makes me cry, (as does The Shootist – and, honestly, even The Fighting Seabees, which isn’t a western but you get what I’m saying). The Searchers and Fort Apache are still really fun, but I’ll be damned if I don’t include True Grit on this list – the meadow shoot-out scene where Cogburn (a one-eyed fat drunkard, remember) drops his reins and spurs his horse forward to ride down four younger, fitter villains, firing a rifle in one hand and a pistol in the other, remains one of the greatest badass scenes in cinema history. Is there a more rousing line than ‘fill your hands, you son of a bitch’? The answer, of course, is no. No, there is not.

Surely the most kick-ass nun of all time has to be Sister Mary Clarence, played by Whoopi Goldberg in Sister Act. OK, so technically she’s not actually a nun but a showgirl in hiding in a convent after witnessing her mobster boyfriend shooting someone, but still… During her stay she takes over the choir and transforms them into a musical phenomenon which wows the local community and ultimately saves the convent from closure. It’s awesome.

Here’s Whoopi and co entertaining none other than the Pope in the finale of Sister Act. Special mention goes to nun-in-training Sister Mary Robert who has some serious pipes on her…

In 2013 Lara Croft got a long overdue makeover. In a new game which fleshed out Lara’s origin story and nipped in her silhouette, Tomb Reader gets a much-needed dose of realism.  Lara is still uncommonly attractive, but in Tomb Raider you’re more dazzled by her survival skills than her waist to hip ratio.

Scribed by Rhianna Pratchett, Tomb Raider has a gritty, human element. Lara wades through caves flooded with gore and plummets through vertigo-inducing set pieces, but she also deals with her first kill and the deaths of her friends.

The bow and arrow is Lara’s first weapon of choice in Tomb Raider, but as the game develops guns become more important and in the final battle she whips out her iconic double pistols.