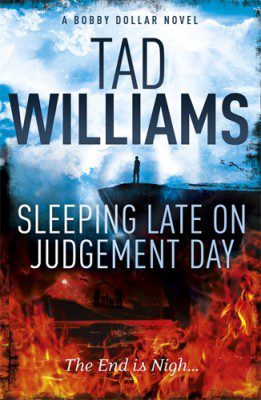 Posted on September 15, 2014 in Books with tags Fantasy, Tad Williams

In the early part of the fourteenth century, Dante Alighieri embarked on his epic masterpiece, the Divine Comedy. It told how the poet had lost his way ‘in the dark woods’ of his middle years, entered Hell and, guided by the spirt of Virgil, journeyed through the inferno to Purgatory and then to Paradise where his beloved Beatrice, with her eyes ‘kindled from the lamps of Heaven’, resided.

In the early part of the 21st century Tad Williams embarked on his dark epic fantasy trilogy, The Bobby Dollar series: The Dirty Streets of Heaven, Happy Hour in Hell and Sleeping Late on Judgement Day; the last just published last Thursday. So what are the main differences between Dollar and his predecessor Dante? Is it simply the difference between the medieval and the modern?

Well, for a start, Bobby is an angel with an angle; an angel advocate to be precise, arguing for the rights of the departed. He’s a maverick who is not really comfortable in his allotted task of being an angel advocate, particularly, as here, when he loses a client and unmasks a massive theological conspiracy. In Bobby’s world, Purgatory doesn’t get as much a look in as Hell or Heaven, though you might argue that his imagined Californian city of San Judas exhibits signs of the purgatorial from time to time, inhabited as it is with cursed were-pigs, psychotic demons and Satanic multinational companies. Or perhaps Purgatory is the Third Way, a breakaway movement of syndicalists on both sides of the fiery divide  who have split away for the strict edicts of the Almighty. Their existence gets Bobby in trouble when one of his souls goes missing before it’s been judged, and the rest of the trilogy develops into an eschatological missing persons case.

In Dante, Heaven and Hell are about politics, particularly in regard to those who have aided or thwarted Dante’s own political ambitions. Don’t fancy an eternity gnawing someone’s skull on the frozen plains of Cocytus? Then don’t diss the Guelphs! In Bobby’s world, Heaven and Hell are more about business. In the Above and Below rigid bureaucracies obtain: the Eternal War is organised along the lines of big industry, the various angels and demons vying for the custom of our souls speak in the vernacular of corporate lawyers, Harvard business grads or Mafia enforcers.

At least Bobby doesn’t have the same problem as Dante — though he too may appear to be in his middle years, he is in fact immortal.  He suspects that, in his past life, he was not exactly sinful but certainly badass… but he can’t remember. Bobby likes earthy, fun-loving guy stuff, probably exactly the stuff that got Dante stuck in the dark woods in the first place; namely wine, women and song, all of which are to be had at the local angel bar, The Compasses.

Unlike Dante, Dollar is not motivated by a heavenly womanly ideal but a very demon-like one: Casimira, Countess of Cold Hands: ‘she looked like Wonderland’s Alice as dressed for success by a committee of manga-reading Japanese business men’; ‘her eyes were a big as a doe’s’ under the dome light, but none of Bambi’s relatives ever had a gleam like that.’ When we first meet her she is doing the Devil’s work hanging out in campus bars seducing frat boys and girls then driving them to suicidal despair. Bobby, being Bobby, falls head over heels and soon they are having steamy sex in Casimira’s velvet-swagged safe house; ‘an antique version of a sultan’s harem’. From that moment on Bobby’s journey is going to  take an opposite route to Dante’s: that is mainly down rather than up. His muse is whisked off to the infernal depths by her boyfriend Eligor, the Prince of Hell, and Bobby decides to effect a rescue. William’s hell is slightly more corporate than Dante’s. There are all the same kind of rings of punishment and burning rivers but also a massive elevator to take you conveniently up and down the various levels of torment, all of which Bobby will enjoy at some time or other on his trip.

But, in the end what propels readers through both epics is not the theological but the eternal story: boy meets girl, gets separated from girl, goes through hell to get her back. You may know how Dante ends up in his quest for Beatrice, but for the Bobby/Casimira romance you’re gonna have do the pages.