You may look in a comic shop, see the latest Game of Thrones graphic novel and say to yourself, ‘that can’t possibly be as good as the books’. When we talk about fantasy we have certain expectations like a complex plotline and a stack of pages to read through, so how can fantasy possibly work in picture-form?

The answer: Excellent illustrators and authors who create fantastic stories featuring fantastical elements with exciting creatures and little text. Today we’ll be giving you some wonderful recommendations of different fantasy comics and graphic novels that are great start points for readers completely new to the world of comics, but who enjoy fantasy. 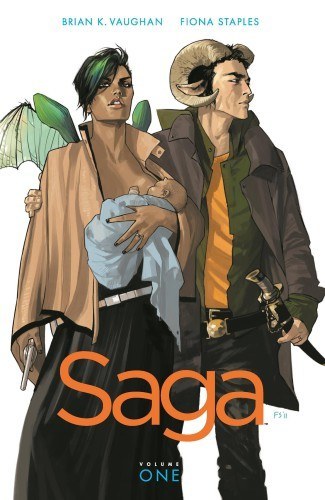 This series is an on-going comic series set in Space, following a relationship, romance and adventure across the Universe. Along the way you will meet characters who are cute, creepy, surreal and just plain weird. This is a series many people will recommend to first-time comic readers because it is incredibly easy to dip into, and you will be hooked into the adventure from the first few pages.

The artwork is full-colour with vibrant poses and expression often included and the story is fast-paced, featuring many twists and turns. 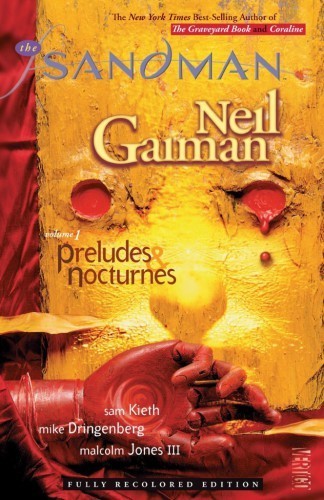 This long-running series is a comic classic for many readers. As you probably know Neil Gaiman is a highly-regarded fantasy writer, and this series was a major part of his success. The story focuses on a character known as Dream of the Endless (or the Sandman), who is essentially a god, controlling the world of dreams. However, when we pick up the story Dream has been trapped and needs to escape in order to set the world to rights.

The artwork is dark and sinister with a seedy style, and guest artists often featuring, but the story is as strange as any Gaiman novel so if you like his other work you’ll probably enjoy this series! 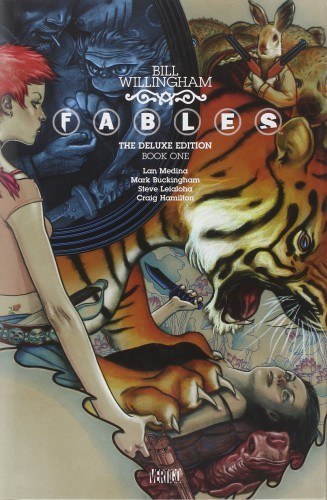 Fables is a story which inspired TV shows like Once Upon A Time and games such as The Wolf Among Us. If you’ve any interest in either of these then read Fables.

This series follows a large group of mythical and fantastical characters who have had to leave their world because of a dark power known as the Adversary. They set up a life in the human world and try to live normal lives but of course there’s only so much ‘normal’ that fairy tale creatures and characters can take.

The artwork is classic and features lots of washed-out colour palettes and clean line-work for the characters and expressions. There is a slight shift in art style as the story goes on.

One of the newest on-going series: 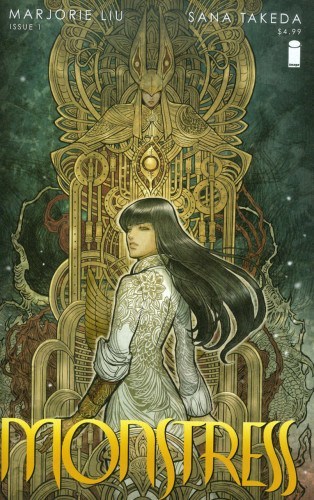 In this on-going adventure you follow Maika, a young girl who seems to have a creepy power trapped within her that she doesn’t know how to control. Add in the fact that this world has mutants, strange talking animals and evil powerful antagonists and you already get quite the adventure.

The artwork for this story takes influence from Anime and Manga art styles with over-exaggerated expressions, cats-with-two-tails and stunning temples and landscapes all featuring in the story.

If you enjoy fairy tales:

Porcelain: A Gothic Fairy Tale by Benjamin Read and Chris Wildgoose (YA) 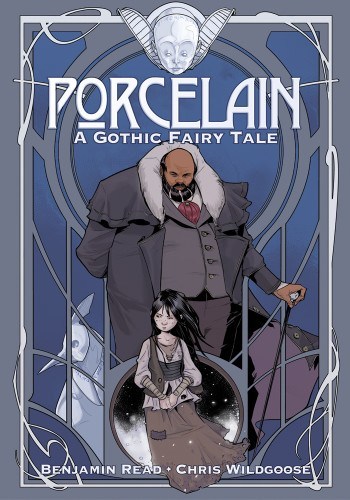 This story is essentially a cross-over of Annie and Bluebeard but in all of the most exciting ways. The narrative follows Child, a young orphan who is dared by her other friends to creep into the spooky mansion where the Porcelain-Maker lives. Child does this and ends up getting introduced to what the Porcelain-Maker does and the world of Porcelain he has crafted.

The art style within this uses pastel colour schemes and clean, clear line-work to give beautiful panels for you to admire.

Lady Mechanika by Joe Benitez (YA) 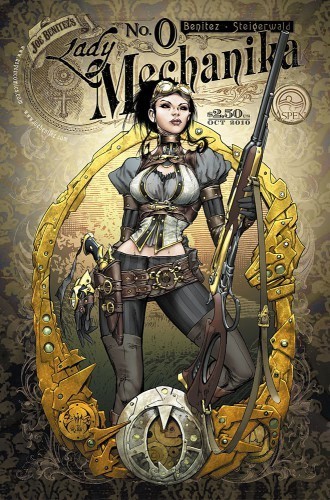 This series is another on-going one which follows the character of Lady Mechanika, a bad-ass female who really knows how to get stuff done. She’s got a mechanical limb and we follow her as she dresses in fantastic outfits and beats up bad guys, all whilst trying to untangle her past.

The artwork for this series embraces bold lines, dark colours, sleek curves and wonderful period-piece costumes. There are also amazing landscape panels which provide plenty of quirks to study.

The Wicked + The Divine by Kieron Gillen and Jamie McKelvie (M) 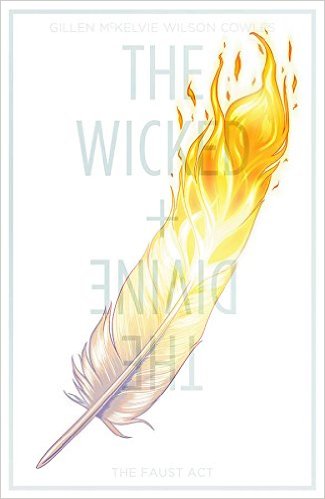 If you’re at all interested in myths, gods and legends then The Wicked + The Divine is a series you need to check out. Not only does it feature various different Gods being reincarnated from all types of religion and myth, but we also have backstabbing, mystery and treachery taking place.

The artwork here has been hugely praised for the clean, bold and very striking visuals. Every panel is a delight to peruse, and the colours pop out of the page at you.

To read with children:

Amulet by Kazu Kibuishi (U) 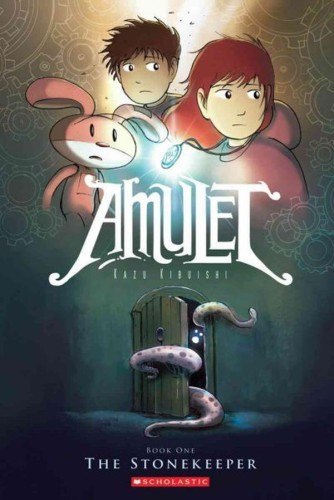 If you have children or you want a series which is appropriate for all ages then try Amulet which is a Narnia-style adventure. The story is about a young brother and sister who have to try and rescue their mother after she is lured into the basement and another world by a nasty creature.

The artwork here is dreamy and serene with some lovely imaginative creatures and characters also becoming big parts of the story. The bright colours and little type mean this one will keep the attention of young and old readers alike.

Lumberjanes by Grace Ellis, Noelle Stevenson and Brooke A. Allen (U) 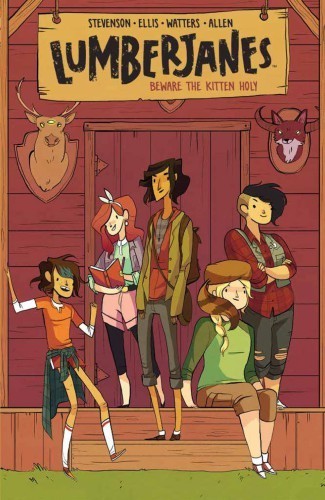 This on-going series follows a group of girls at a summer camp who are supposed to be working towards gaining badges and having fun (similar to the girl Guides). Instead of doing the classic sewing, decorating and crafting, the girls soon realise that there’s magic around the camp and lots of mystical adventures awaiting them… Again, this is entirely appropriate for children to read.

The artwork is bright and over-exaggerated with lots of pops of colour and rich scenery to keep your eyes excited.

And finishing on an all-time favourite:

The Arrival by Shaun Tan (U) 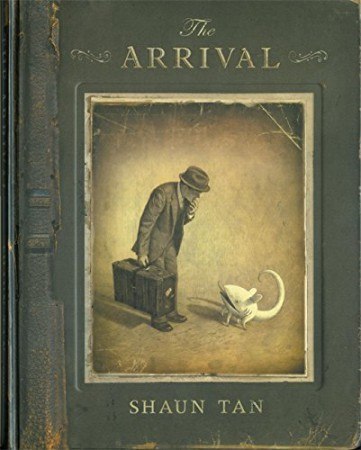 This story is a standalone silent story, told entirely through images. The story uses pencil-drawn panels and shows a young family forced to flee their home and migrate elsewhere. This story isn’t set in our ‘real world’ but rather in another world where corruption takes the form of crawling tentacles and creepy shadows. The journey undertaken by the man in the story is the biggest and scariest he’s ever had to face, but as you follow his adventure you become absorbed in his plight quite as much as you might for a character from an epic fantasy novel.

Do let us know if you have read any of the ones we mentioned what you thought of them, and if you have any other suggestions of excellent fantasy comics and graphic novels then leave them below. As always, happy reading! 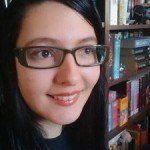