Children of Earth and Sky: An Origin Story 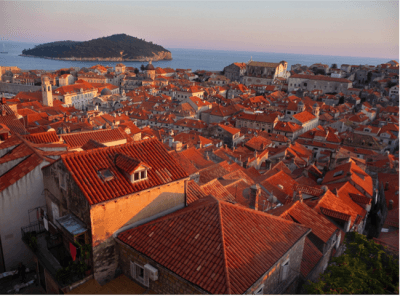 Dubrovnik from the walk around the walls, with the isle beyond

Guy Gavriel Kay tells us about the origins of his new novel Children of Earth and Sky, a sweeping fantasy epic inspired by Adriatic pirates, the city of Dubrovnik and the conflicts and dramas of Renaissance Europe.

Croatia has roads in many places going back to the Romans. They joke today that the old roads are better graded and designed than the new ones. It is probably true. On a book tour many years ago, I was being driven along such a road by my publisher there, the extremely sharp, high-octane Neven Anticevic. Neven had had me touring in his country twice before, has published everything I’ve written, was a friend by then, and still is. He drives fast.

We were headed for the Dalmatian coast where we were to present my newest book to a conference of librarians. He apparently danced with them all night after the presentations, had done so a few years in a row. It had become, he said, expected of him. He invited me to do the same. I pled something or other. I was enjoying the scenery, the twists of road and conversation, and was trying to ignore the speedometer.

Suddenly, truly out of nowhere, Neven exclaimed, ‘I know! You should write your next book about the Uskoks!’

In the suave, never-fazed manner upon which I recklessly pride myself, I said, ‘Say what?’ 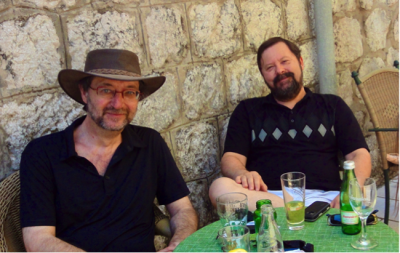 On the Dalmatian coast. Guy Gavriel Kay and Neven, who first spoke the phrase ‘Uskoks of Senj’ to his author

Neven replied, impatiently, as is his wont, ‘The Uskoks of Senj!’ His tone suggested that this ought to be all the clarification an adequately educated person should need.

‘Of course, of course,’ I said. He caught something in my voice, and took a long look at me.

‘Of course there is a curve,’ he said. He deigned, briefly, to look at the road and address what it presented. He then went on to explain, kindly, that in the Renaissance period, the Uskoks had been raiders based in a town (Senj, as surely everyone knows!) on the coast ahead of us. They boarded and robbed trading ships in the Adriatic, and sent land parties through inland passes for whatever they could seize to survive. They used swift, small boats, could elude maritime pursuit almost magically, and had a ferocious, proud, hero-based ethos.

I travelled to Croatia again, as the guest of a different conference, once more on the Dalmatian coast. This time an academic named Robert Kurelic joined Neven in explaining to me how my life as a writer would be lacking any proper focus or direction if I did not write about the Uskoks.

‘Mm-hmm,’ I said. And went on to write two China-inspired novels. ‘Malleable’ has never been high on the list of words applied to me.

On the other hand, ‘curious’ has been. When I finished River of Stars, the second of the Chinese-themed books, I was casting about, as always, for ‘what comes next’ and I remembered those Adriatic pirates. I found a book about them by an English academic, and Robert generously chased down and relayed several articles. I started reading.

And something began to gel. Partly due, without a doubt, to the visit Laura and I had also paid to Dubrovnik (reading, interviews, signing, playing tourist) on that last trip to Croatia. I am not going to be the first person to say that Dubrovnik is a pretty remarkable place, visually and historically. 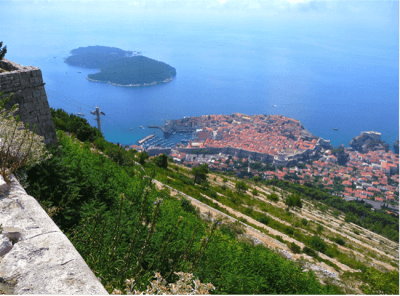 Dubrovnik and walls, from the fortress above town, showing the harbour and nearest isle…both inspiring elements of Children of Earth and Sky

I was reading quite widely, about various times and places, scribbling notes (I scribble at the ‘notes’ stage), not focused anywhere, but I decided to order some books on Dubrovnik, once known as the Republic of Ragusa.

Somewhere in that time we took a trip to Venice, and that not-very-serene Republic re-entered my thinking. And right about then I realized I was pretty much zeroed-in on a book, after all, I knew where I was headed.

It happens for me that way, almost every book. I am noodling about, meandering, reading about a variety of times, cultures, figures, theses on history and the present day, I’m making those notes, brooding (picturesquely) and … I don’t so much make a decision about what the next book will be, I discover that I’ve already made it. I just need to acknowledge it, and catch up.

Children of Earth and Sky arrived this way. Obviously not springing forth whole (my brow is not Zeus’s, the book is not Athena), but I realized I had a period, settings, (Uskoks!), and some thoughts on what I would try to do with this one. I wanted to write a book about ‘borderlands’ in a time of large-scale conflict between empires and faiths, but with protagonists who were not potent, dominant figures in that conflict, neither political nor military. Instead, they’d be men and women trying to shape (perhaps control) their own lives in, through and around the edges of such a war.

There’s a quote from the great French historian Fernand Braudel that I sent with the book proposal through my agents to my publishers. I didn’t end up using it as an epigraph (though I was tempted) because it felt too ‘on the nose’ as to one theme, and I prefer epigraphs of association, ones that open up more after a reader has finished a book. But this, from Braudel, was in my mind as I began writing:

Between two enemy religions it would be unwise to imagine a watertight barrier. Men passed to and fro, indifferent to frontiers, states, and creeds. They were more aware of the necessities of shipping and trade, the hazards of war and piracy, the opportunities for complicity or betrayal…

That wise notion, how the ‘great events’ of a time can be less important to many (most?) people than their own immediate loves, losses, joys and sorrows, needs and desires, is one I’ve explored before. This time it is foregrounded, and so this, too, is part of the origin story of Children of Earth and Sky.

It started on a Roman road near the Adriatic, though, hearing the word Uskoks for the first time. I just didn’t know it was a beginning, not for a long while. That happens. 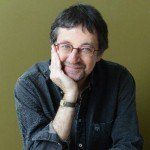 Guy Gavriel Kay has published twelve novels which have been translated into more than 25 languages and have appeared on bestseller lists around the world. He is also the author of the acclaimed poetry collection, Beyond This Dark House. His most recent …

2 comments on “Children of Earth and Sky: An Origin Story”