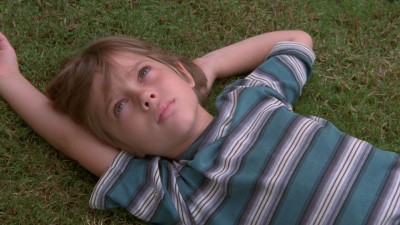 If you’re thinking about a trip to the cinema this weekend and Guardians of the Galaxy isn’t floating your boat, I would 100% recommend that you go and see Boyhood.

It’s totally unique, having been filmed with the same cast for twelve days a year over a period of twelve year so that you watch the characters grow gradually older. The boy referred to in the title is Mason (Ellar Coltrane), who morphs from cute kid to gangly college student; meanwhile, his sister Samantha (played by director Richard Linklater’s daughter, Lorelei) goes in and out of a spectacularly awkward adolescence, and their mother (Patricia Arquette) enters middle age in front of our eyes. The difference between this and the usual situation of seeing a child being played by a different actor at every stage of life / adult actors being unconvincingly aged through make-up and lighting is huge. It’s almost like watching someone’s home videos, but in the form of a fictional, beautifully produced film.

Which brings me to my next point: all of the above might just be a gimmick if it weren’t for the fact that the film, quite apart from that, is outstanding. I’m a big fan of ‘slice of life’ movies, and Boyhood is one of the best I’ve come across. The characters feel completely real, flawed and likeable in equal measure, and their journey is utterly relatable, never overly dramatic but never boring to watch either.

I will end with a link to the film’s soundtrack, which is a joy in itself as a musical journey through the last twelve years.