Becky Chambers on the contents of the Voyager Golden Record 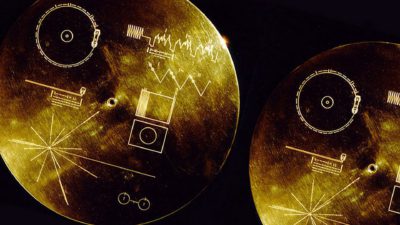 Posted on July 4, 2019 in Books, Fun Stuff with tags To Be Taught If Fortunate, becky chambers

Two of my favorite extant objects are ones I will never see. But then, their lack of proximity is rather the point. As I write this, they are respectively about eleven billion and thirteen-and-a-half billion miles from Earth (these figures grow by the second). It is quite possible — likely, even — that no one will ever see them again. That’s beside the point.

In 1977 — the same year that Star Wars hit theaters and the Apple II hit shelves — two spacecraft launched from Cape Canaveral, just a few weeks apart. They were built to last five years, and their original mission was to study Jupiter and Saturn up close. We had never visited the gas giants, and this destination was grand adventure all on its own. I get goosebumps imagining scientists crowding around monitors as the photographs came back, becoming the first to view interplanetary wonders: raging storms, icy rings, moons with active volcanoes. The spacecraft were still working just fine after this success, so the mission was extended to include Uranus and Neptune, then extended again to follow the twin probes well beyond our planetary neighborhood. The Voyager mission is now in its forty-second year, and both Voyager 1 and 2 are now travelling through interstellar space. They’re still gathering data. They’re still phoning home.

I’m explaining all of this for the sake of context, because we haven’t actually arrived at my two favorite objects yet. It’s not the spacecraft themselves that I have a particular affinity for. It’s the cargo they carry.

One side of each probe holds a phonographic record, made of copper and plated in gold. As its label clearly states, each record contains “The Sounds of Earth”: Music, animal calls, friendly greetings in fifty-five languages. Recordings of heartbeats, thunder, kissing, engines, fire, footsteps, ocean waves, morse code spelling out per aspera ad astra. The record includes encoded images as well — 115 in total, ranging from sketches of DNA to photos of Earth to diagrams of human reproduction to scenes from everyday life. It is a small, encapsulated piece of the enormity that is us, stamped into metal, strapped onto the sides of two awkward-looking robots, and blasted out into the galaxy in the hopes that maybe — just maybe — someone will find it (visual instructions for playing the record are, of course, included).

I love listening to the contents of the Voyager Golden Record (you can do the same, if you like). It’s not a particularly congruous listening experience, and the recordings aren’t all pleasant things to listen to, but that doesn’t matter. What matters is the relentless optimism, the starry-eyed passion that went into making these things at all. The hours upon hours spent in careful, careful discussion about how best to sum up humanity, about which languages would represent the largest number of living humans, about which pieces of music were just right. On a quieter note, the records are a love story — the story of how Ann Druyan, the creative director of the project, met Carl Sagan, the content committee chair, and then went on to get hitched and shape the worldview of an entire generation through the combined power of their words. I genuinely don’t know who I’d be today if it wasn’t for their work, and the work of every scientist and researcher and engineer who brought about that gorgeously idealistic era of space exploration. It doesn’t matter if anyone ever finds the Golden Records, or if there even is anyone out there to find them. What matters is that we thought it was worth a shot — not because there was any profit in it, or an opportunity to stick a flag somewhere, but purely because we hoped to connect with something greater than ourselves.

Anyway, the reason I’m here is because I was asked to write something about why I wrote To Be Taught, If Fortunate. That’s basically it. 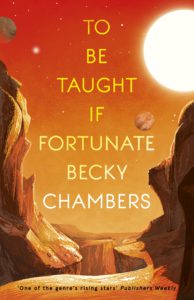 To Be Taught, If Fortunate will be published in August 2019 and is available to pre-order now.