Acceptable in the Eighties 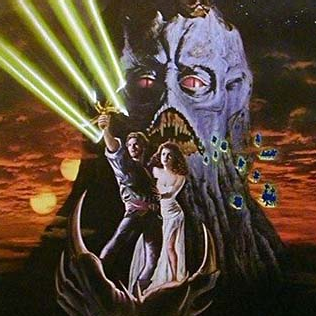 When you heard they were remaking RoboCop, you probably had some reservations.

The new one is alright, but… Paul Verhoeven’s original wasn’t just “alright”. It was one of the best films of the 1980s, a yuppie satire masquerading as a steroids n’ Uzis action flick. It was epochal; the upgrade is not.

If we must have remakes – and it seems we must – then why not revisit movies that could do with a tidy-up, rather than bona fide classics?

Nick Castle’s slice of sci-fi cheesecake featured Lance Guest as Alex Rogan, a trailer park loser whose one talent appears  to be racking up high scores on the Starfighter arcade game (an eighties design delight in itself).

Alex has failed to get a place a college – just as well, then, that the video game is a recruiting programme for real starfighters out in space…

As one of the first movies to use effects generated by a computer (I imagine a throbbing machine the size of a car park, spitting out floppy disks in steam-driven pique), The Last Starfighter marks a milestone in movie history. But its real magic is in its characters, especially the aliens: hipflask-swigging space hustler Centauri (Robert Preston), Rogan’s pilot, Grig (an unrecognisable Dan O’Herlihy) and Norman Snow as the dome-headed baddie, Xur – part Julian Sands, part Julian Clary.

Change it: It was going so well, up until Death Blossom – cinema’s silliest deus ex machina. “So, we just press this big button and all the baddies die? Why don’t we save that for the climax? Righto!” 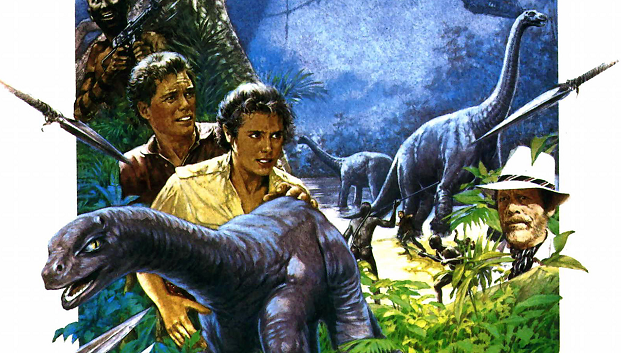 Disney dinotopia from Bill Norton, here, as Sean Young hooks up with William Katt – the man who was nearly Luke Skywalker – to babysit the creature in the title: a juvenile brontosaurus, separated from its mum in central Africa.

With its glorified glove puppet creature effects, Baby looks a little under-evolved – more South Park than Jurassic Park. But the central concept is lovely, and Baby’s green feline eyes remind me of Toothless from How To Train Your Dragon – a great model for any possible remake.

Change it: New effects, please. For a kids’ film, there’s a lot of gun violence – and did Sean Young take her top off, or is it false memory syndrome? I think I’d drop a couple of gears and play it safer.

And throw in a T-Rex. 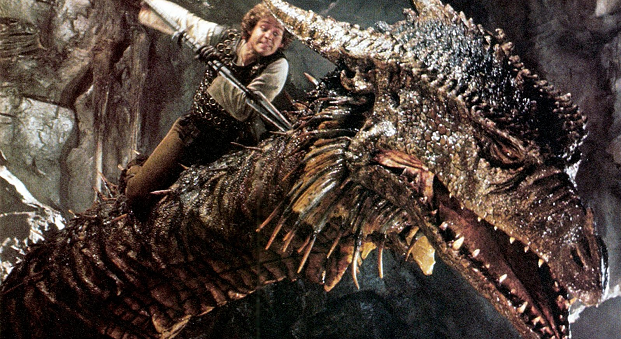 Matthew Robbins’ medieval fantasy effort saw sorcerer’s apprentice Galen (Peter MacNicol) battling an evil dragon and a corrupt king. Again, for a Disney film it’s a lot darker than you might remember – and subversive, too. A beautiful princess needs rescuing, but… Oh, I wasn’t expecting that. Never mind, here’s some clergymen (led by Ian “Palpatine” McDiarmid) to say a few prayers… Oh. That must sting a bit, Palpie.

A huge obstacle for any remake is the creature in the title – Vermithrax Pejorative, a magnificent stop-motion creation which still ranks as cinema’s greatest dragon. Smaug? Third place, behind Pete’s Dragon.

Change it: We could do with a quicker pace, and a better climax: Galen’s fight with the monster arrives too soon, and the rest of the film struggles to match it.

In which producer Roger Corman tries to cash in on the Star Wars craze by remaking The Seven Samurai /Magnificent Seven in space. John Boy from the Waltons… sorry, Richard Thomas… joins George Peppard, some colourful aliens and – neat move! – Robert Vaughan in a spaceships n’ lasers brawl with John Saxon’s villain.

If you need your memory jogging: this is the one where the spaceship has breasts.

It’s terrific fun – and, as with many Corman efforts, it’s notable for the emerging talents involved. James Cameron was the chief designer, John Sayles penned the script and James Horner wrote the score.

Change it: Swap director Jimmy T Murakami for Cameron and let’s get it done.

Peter Yates’ swords n’ sorcery romp sees Ken Marshall (nah, me neither) leading a bunch of odd-looking creatures including a Cyclops, a shape-shifter and Alun Armstrong in a bid to rescue a princess (Lysette Anthony) from the clutches of The Beast.

There’s so many terrific ideas that my word limit can’t contain them: fire mares; the “Where’s Beasty?” vanishing castle; the Slayers, who resolve the how-to-combine-a-laser-gun-and-a-spear conundrum; a whacking great stop-motion spider; a really horrible Big Bad; and the Frisbee-cum-decapitator, the Glaive – the finest fantasy cinema weapon since the lightsabre. Watch out for Liam Neeson and Robbie Coltrane in early roles.

Change it: You know what? I’m happy with this as it is. Krull rules!

2 comments on “Acceptable in the Eighties”